A clam fishery in the estuary of the Yalu River on the Yellow Sea coast became the first in China to be MSC certified in September 2021 through the collaboration of the WWF, Nichirei Fresh, and the clam producer Dandong Taihong Foodstuff.

The road to acquiring the MSC certification, which is drawing worldwide attention as a cornerstone in preserving the biodiversity of the Yellow Sea and the Yalu River, which are considered places of high environmental conservation value, and as an important starting point to promote the supply of sustainable seafood, was not an easy one.

Mr. Hidenori Kunita of Nichirei Fresh, Mr. Makoto Yoshida of WWF Japan, and Ms. Aiko Yamauchi, formerly of WWF Japan and currently COO of Seafood Legacy, who collaborated to secure the MSC certification, talk about the difficulties they faced in acquiring it, the changes that have taken place since then, and their outlook for the future.

Bringing Together an Experienced Team and Chinese Experts, a Collaboration of the Public and Private Sectors

Yamauchi: In order to acquire the MSC certification for the Chinese clams, we first started working on the Fisheries Improvement Project (FIP) in 2016. Were there any difficulties in gathering data and documents for the pre-assessment?

Kunita: A Nichirei Fresh technical advisor who had been dispatched to Taihong Foodstuff was the driving force behind this effort. The Marine and Fisheries Group staff at WWF China also contributed their advice.

Yamauchi: Let me ask Mr. Yoshida, you took over this project and were in charge of the process of acquiring the MSC certification. What issues did you find after the pre-assessment?

Yoshida: We had gathered data and materials during the pre-assessment, but we still needed more information to be able to pursue the MSC certification. There were many issues that needed improvement, starting with fisheries management. 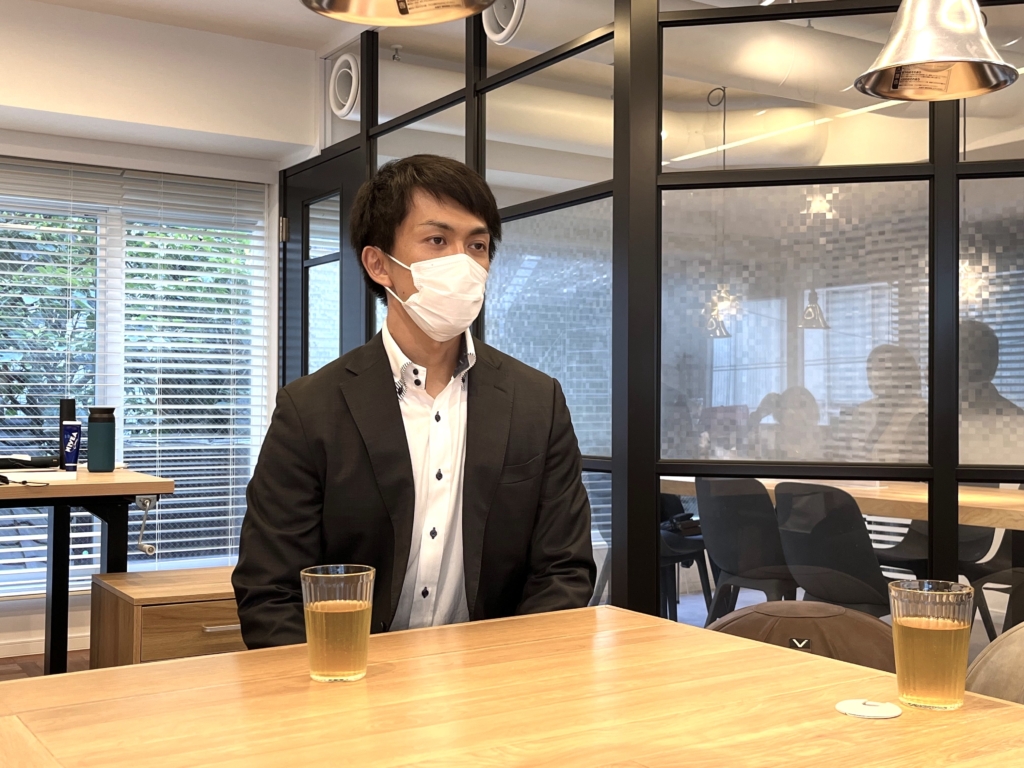 Yamauchi: Was it difficult to collect data on the stock of juvenile clams at the production area and how much is sustainable to catch?

Yoshida: We gradually learned about this through the cooperation of the Fisheries Bureau of Donggang City, Liaoning Province, Dalian Ocean University, Liaoning Ocean and Fisheries Science Research Institute (LOFSRI), China Aquatic Products Processing and Marketing Alliance (CAPPMA), MSC China Office, and other partners in conducting our research. I believe that this was a unique case in which so many Chinese experts came together in cooperation with the public and private sectors.

Yamauchi: I see, so the WWF coordinated the entire project, while Kunita-san and the local staff assisted Taihong Foodstuff.

Kunita: In China, the MSC certification itself was almost unknown, so the first question from Taihong Foodstuff was, “What does it actually mean to get this certification?”. Nichirei Fresh explained to them that the MSC certification had been gaining popularity in Europe and other parts of the world and that it would also become more widespread for Asian marine products, and they agreed to give it a try.

Yamauchi: I remember Mr. Kunita saying at that time that we should get MSC certified, which is a certification system that covers fisheries, rather than restarting the process with the ASC, which has different standards, in order to make a strong case that the clam “fishery” should coexist with the marine environment and the surrounding ecosystem.

Kunita: One incident made us realize the need to be environmentally conscious. When Nichirei Fresh began handling Chinese clams in 2006, we were using clams that had been caught by hand-digging. However, when we went to survey the area around 2008, we found that the beaches where clams had been caught by hand-digging had been landfilled by the construction of an expressway. I sensed that if we failed to take environmental considerations into account, we would lose our best beaches, and the clam business itself would not be sustainable. 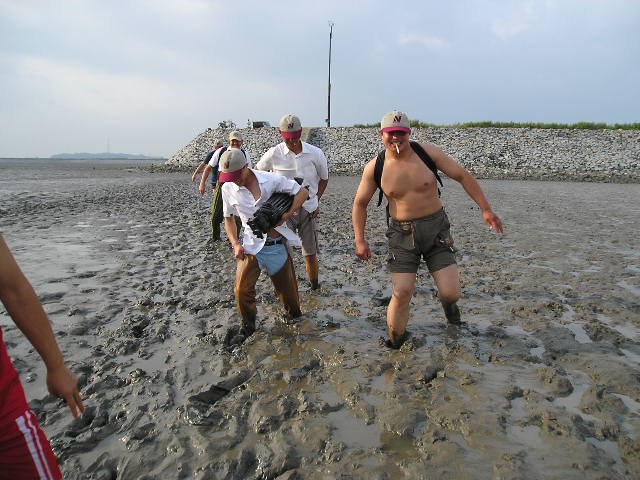 Mr. Kunita along with local staff traveled to the beach where the clams were caught by hand-digging to take pictures.
The tide returned after a long day of taking pictures, and the walk back was a struggle.

Yamauchi: Please tell us about the time you completed the FIP and started the MSC’s full assessment.

Kunita: As we moved into the MSC full assessment, more performance indicators were identified as challenges. One particular challenge was data on the management system for juvenile clams delivered from Putian City in Fujian Province, China. This data belongs to the Chinese government, so it was difficult to get them to provide us with sufficient data.

Taihong Foodservice then consulted with a professor at Dalian Ocean University who asked his students to reside at a center for juvenile clams in Putian and write a report. Based on this report, we were able to obtain permission from the Chinese government regarding the provision of data.

Yamauchi: It could be said that this review was successful because Taihong Foodservice sought cooperation from various parties. How did they obtain the cooperation of so many different people?

Kunita: Above all, it was the hospitality of the manager couple of Taihong Foodservice. They value human connections as a business principle, and have done so for generations, so when something goes wrong, everybody is willing to help. 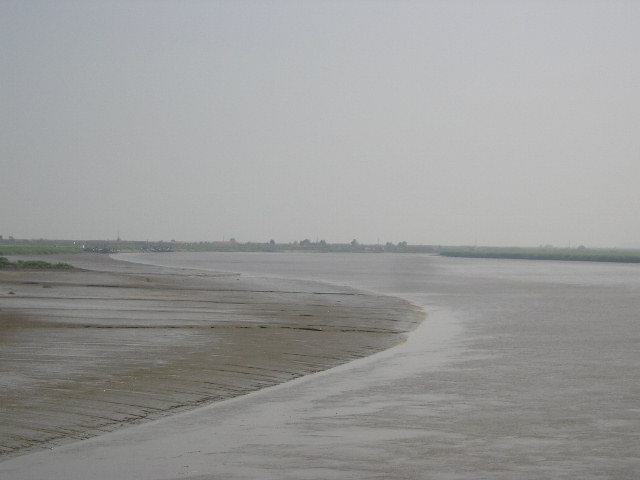 The beach where clams were caught by hand-digging was landfilled for an expressway construction project.

Yamauchi: It took a total of five years from 2016, when we officially launched the FIP, until you obtained the MSC certification in 2021. It was a five-years long struggle, but looking back, how did you feel about it?

Kunita: When the FIP took a long time, there certainly were many people within Nichirei Fresh who wondered when we would be able to get certification. But it was our first experience, so management was willing to wait. I think that’s what made it possible for us to achieve what we did

Yoshida: The plan we drew up based on the results of the initial pre-assessment was to complete the FIP in one to two years. It actually took much longer than that, but I believe that everyone’s perseverance and joint efforts led to us getting the MSC certification.

Yamauchi: Has the MSC certification brought any changes to the markets in China and Japan?

Kunita: Following the certification, Taihong Foodstuff has had inquiries from Chinese e-commerce retailers and other companies interested in dealing MSC-certified clams grown locally. It appears that interest in MSC-certified seafood as health food products is growing.

Additionally, Nichirei Fresh is promoting the MSC-certified Chinese clams as a value-added seafood in the Japanese market. As a result, last year the product was introduced by one of the industry’s top convenience stores.

This convenience store company was strict about traceability requirements, but we were able to quickly complete the review process because our staff at Taihong Foodstuff was ready to provide a good presentation. We realized that what we had done for the MSC review process could also be applied to customers with more stringent standards. This is one example.

Kunita: After we obtained the MSC certification, I discussed Mr.Yoshida what our next challenge
was going to be, namely, the assessment for renewal in four years’ time. I think the key point for the next assessment will be to get more information on the management system for juvenile clams, which was also difficult during the first assessment. We are still restricted from entering China due to the Covid-19 situation, but we intend to tackle this issue further over the remaining two years of the project.

Yamauchi: The FIP and AIP (Aquaculture Improvement Project) have a long road leading up to certification, which is the ultimate goal as far as the producers are concerned. In the case of the Chinese clams, some were impatient and wondered why certification could not be obtained sooner. On the other hand, I believe that the multi-year project period has helped to deepen the understanding of the principles and standards of the MSC certification itself among all parties involved.

These examples illustrate that the significance of the project does not end with acquiring the MSC certification, but rather is an important process for maintaining the certification while ensuring that all parties involved share the vision of the project as a whole.
We have high hopes for your continued efforts in the future.

Hidenori Kunita
Graduated with a degree in Fisheries Science from the Faculty of Marine Science, Hokkaido University. Joined Nichirei Corporation after graduation. Worked in sales of processed seafood and distribution of freshly processed products to mass-market retailers, then became in charge of overseas processing at the headquarters and took charge of processing operations in China and Southeast Asia. Since 2006, he has been in charge of the development and promotion of shellfish products such as clams, oysters, sashimi shellfish products, and seafood mixes at Nichirei Fresh Inc.
Makoto Yoshida
Member of the Marine Fisheries Group of WWF Japan. Responsible for the sustainable production of seafood imported and consumed by Japan from South America, Southeast Asia, China, and other regions, and for coordinating local nature conservation activities. In cooperation with overseas WWF staff, he is involved in various initiatives from the perspective of connecting
the marine nature where many living organisms live, and the supply chain connecting fisheries, aquaculture, distribution, and consumption.
Aiko Yamauchi
Graduated from Tokyo University of Marine Science and Technology, Department of Stock Management. Obtained a Ph.D. from the Graduate School of Marine Science and Technology. After researching examples of community-based fisheries management and joint management in the coastal fisheries in Japan, she joined Nature Conservation Office in WWF Japan. She joined Seafood Legacy in 2019. She serves as the coordinator of the Anti- IUU Forum Japan, a collaboration of domestic NGOs and other organizations.