Toyosu Market moved from Tsukiji in 2018. It has inherited and expanded Tsukiji Market’s traditions to facilitate the smooth distribution of fresh food at stable prices. Toyosu Market also aims to meet the diverse needs of food producers, wholesalers, and consumers and develop as an environmentally-conscious market.

One vendor in Toyosu Market is operated by Haruhiko Ito, President of Chuo Gyorui, a fisheries wholesale company. In 2021, he spoke at the “Tokyo Sustainable Seafood Summit” (TSSS) held by Seafood Legacy.

Haruhiko Ito operates a longtime seafood wholesale* business and succeeded the company at the beginning of 2022, and Wakao Hanaoka founded Seafood Legacy in 2015 to hand over seafood legacy to the future generation. During New Year’s 2022, Mr. Ito and Mr. Hanaoka talked about projects aiming for a sustainable and bountiful ocean.

*Chuo Gyorui is a special wholesaler that has a license from the Minister of Agriculture, Forestry and Fisheries to sell items from producers in comission. From after this, the “wholesaler” means this type of wholesaler.

Haruhiko Ito
Born 1967 in Tokyo. While a student at Nihon University College of Agriculture and Veterinary Medicine, he studied abroad at University of Alaska in the U.S. to study the salmon run for a year. After graduating, he joined Nichirei Corporation and worked in industrial frozen foods.
In 2000, he started working for Chuo Gyorui Co., Ltd. and became president of the company in 2018. As the company’s Chief Operating Officer (COO) within the Marunaka Group of diverse companies with large refrigeration equipment and distribution centers, he is determined to optimize the synergy and collaboration between group companies to develop as a comprehensive wholesaler centering on seafood.

Wakao Hanaoka
Born 1977 in Yamanashi Prefecture. Grew up in Singapore. After graduating in Ocean Engineering and Marine Sciences at Florida Institute of Technology, he engaged in marine environment conservation projects in the Maldives and Malaysia. From 2007, he took on marine ecosystem issues at an international environmental NGO and became a campaign manager before going independent.
In July 2015, he established Seafood Legacy Co., Ltd. and became its president. While networking with diverse stakeholders including Japanese and foreign companies, NGOs, governments, politicians, academia, and the media, he works on the design of local solutions in accordance with international standards suiting Japan’s environment.

Hanaoka:First, could you tell us about the role of Toyosu Market in Japan’s seafood industry and the job of the wholesalers?

Ito: Toyosu Market is the central wholesale market for seafood, fruits and vegetables. With a transaction volume of about ¥370 billion, it is the largest public market in Japan and the world.

The market has multiple roles. Japan’s Wholesale Market Law requires all seafood sold commercially to first go through a wholesale market. And the wholesale market must put a price on the fish.

The job of major wholesalers such as Chuo Gyorui is to handle wholesale products shipped to us from suppliers all over Japan and sell them to middlemen and other dealers. We are the ones who put the fish up for auction.

Hanaoka: Among the seven major wholesalers in Toyosu Market, Chuo Gyorui is the largest. How many fish species do you handle every day?

Ito: We have a wide range of customers, from high-end restaurants to schools. We handle a wide variety of fish, over 600 species. We handle about 25 percent of Toyosu Market’s volume.

Hanaoka: What kind of work did you do before becoming president of Chuo Gyorui?

Ito: After graduating from university, I joined Nichirei (a frozen food company) and worked there for 10 years. I worked in industrial frozen food sales and helped to develop diverse new products.

I also handled Daiei Supermarket’s delica (food) department where Nichirei had the largest share and worked 365 days a year. In those days, Daiei was opening stores one after another, so all the food producers were cheering them on. On weekdays, I had business meetings with clients and developed products and made samples. On weekends, I attended the opening of new shops to support them.

I started my career at Chuo Gyorui in April 2000. My grandfather, Haruji Ito was one of the founders of Chuo Gyorui and was the company’s third president. Today, my father is the company chairman and I am the president. However, Chuo Gyorui is not privately owned. It is a publicly-traded company listed on the Second Section of the Tokyo Stock Exchange.

Hanaoka: It’s been three years since you became the company’s president. What are your current projects?

Ito: In this market built by Tokyo Metropolitan Government, it is quite difficult to start something new since we are restricted to our set role as a large wholesaler. However, Chuo Gyorui has been in business for 74 years, and it must change with the times. Although it’s a little late, we are working with our employees to adapt to changes.

For example, we plan to open a distribution center in March 2022. Shipping is another important role of the market, but since it is inadequate at Toyosu Market, we are now constructing a large facility (6,600 sq. meters) in Toyomicho, a five-minute drive from Toyosu.

Having the new distribution center nearby will enable us to handle fish at Toyosu Market more effectively. As a result, we will attract more customers and make Toyosu Market a more valued place. We had some difficulties along the way, but we worked with our team in the Marunaka Group*.

Hanaoka: The other day, when I toured Toyosu Market, everyone greeted you warmly in adoration. Calling your employees at Marunaka Group “team” like now describes your open and fresh mind.

*Marunaka Group: A corporate group of diverse companies under the umbrella of Chuo Gyorui Co., Ltd.. They have large refrigeration equipment and distribution centers.

Awareness of the Issues of IUU Fishing

Hanaoka: We worked together with a Committee of Fishery Agency Catch Documentation Working Group at the Fisheries Agency that aims to prevent the inflow of IUU (Illegal, Unreported and Unregulated) products in 2020. Also, at TSSS held in October 2021, you gave a presentation at the session about IUU fishing from the standpoint of a Toyosu Market wholesaler. I thought it was a good step forward. You raised the issue that importing IUU products should be blocked. What do you think of this problem now?

Ito: Without a proper marine environment for fish to grow, our business would not consist. For as long as we are in the seafood industry, we must not handle fish caught in ways that stress the environment and must handle seafood sustainably. For our children and future generations, if we do not leave them a viable environment where fish can thrive, it will be a major problem for them. I am very concerned about this.

Hanaoka: The seafood business and seafood culture stand on a rich marine ecosystem. The foundation of this marine ecosystem is now floundering. IUU fishing tramples on stock management efforts that fishermen patiently follow to rehabilitate marine ecosystems and achieve sustainability. IUU fishing must be eradicated from the world’s oceans. As you mentioned in the beginning, the Wholesale Market Law requires Toyosu Market to accept all fish, but what happens when illegally caught fish arrives at Toyosu Market?

Ito: We make efforts to handle only fish whose source and origin are apparent. If we don’t do this, the market will become a black box where even illegally caught fish can be cashed in. If Toyosu Market is not recognised well by everyone, it would be a major problem.

Hanaoka: For this reason, it is important that laws such as the Domestic Trade of Specific Marine Animals and Plants Act work well to prevent the market entry of IUU products. This law was enacted at the end of 2020 and will be implemented from the end of 2022. However, it is urgent to expand the fish species it covers and to create an effective system.

Ito: Yes, of course. Right now, there are still loopholes in the law, but I hope the act will quickly be developed to really eradicate IUU fishing and protect the environment. 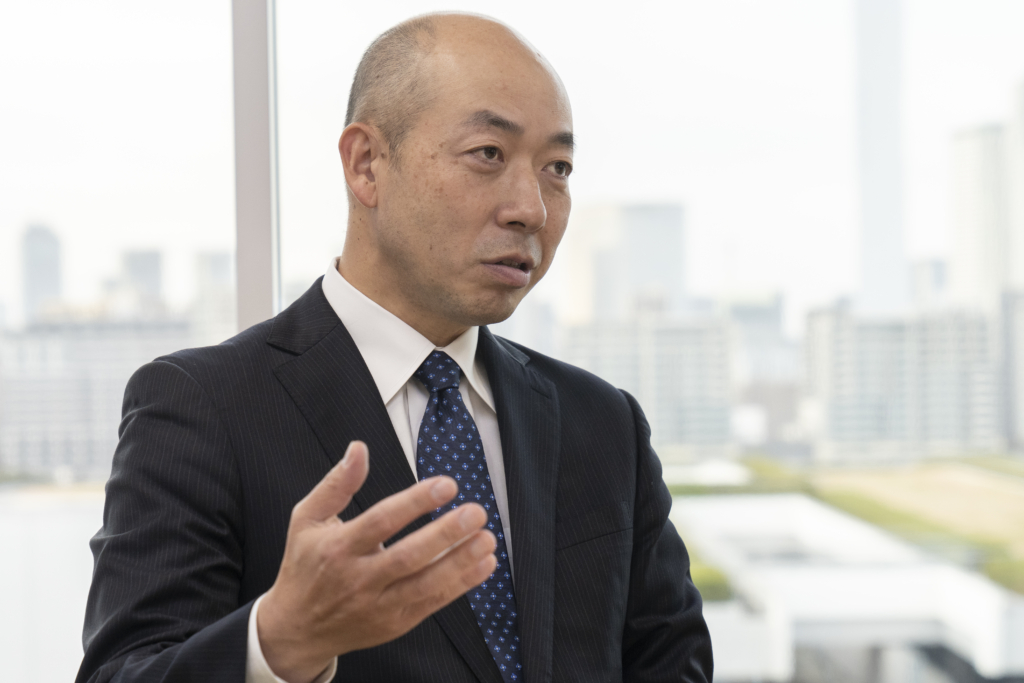 Introducing Traceability as an Initiative

Hanaoka: As you mentioned, the current act still has loopholes. One hole can be plugged by ensuring traceability. The ability to trace who caught the fish and where, and whether it was caught legally also depends on the wholesaler in the middle of the seafood distribution chain.

Since Toyosu Market gathers fish from all over the world to meet the needs of a wide variety of customers, it may be difficult at times to ensure traceability. What do you think about this and what are you doing for that?

Ito: There are endless reasons why traceability cannot be ensured. However, at Chuo Gyorui, we just decided to start by doing whatever we can at Toyosu Market.

Chuo Gyorui is proceeding with a project to attach our own QR codes to the products we handle. The QR code contains the product name, place of origin, and product standards.

We have taken the initiative to attach QR codes to appeal to our customers. We have already offered our QR code system to our wholesale competitors and asked them to help pay for the cost together. We are also pushing producers and distributors at supply points to attach QR codes.

Hanaoka: You’re leading the way in building a system in the supply chain. Even though it might not be perfect at first, you can later use the QR code to indicate the catch information and whether or not it was legal.

Ito: We will eventually have it contain more information. It is important for everyone handling the product to be able to easily check this information. We will first proceed with QR codes, but technologies such as RFID* electronic tags are also developing. While keeping up with the times, we want to make a difference with what we can do now.

*RFID (Radio-Frequency Identification): A new system that uses a scanner to read and write data recorded in the memory of dedicated tags. It is used for prepaid IC cards for public transportation, and manufacturing, distribution, and retail industries.