Nestled between the Chinese mainland and the Korean Peninsula, the Yellow Sea is home to a rich ecosystem with a diverse variety of wild lifes. The coastal area has vast tidal flats covering an area of 20,000 km², making it an important relay area for migratory birds, as it is included in the East Asian-Australasian Flyway, one of the nine migratory bird migration routes in the world.

The wetlands at the mouth of the Yalu River are one of the world’s leading production areas of clams, and WWF Japan has been working to conserve biodiversity in the area, which has prompted Nichirei Fresh to ask Dandong Taihong Foodstuff, the local clam processor, to adopt stock and environmental considerations in procuring “sustainable seafood”.

In light of this situation, Dandong Taihong Foodstuff, Nichirei Fresh, WWF China, and WWF Japan have been collaborating on a fishery improvement project (FIP) since 2016, and in September 2021, acquired MSC certification for their clam fishery. This certification is the very first for a clam fishery in China and is considered to be a cornerstone for environmental conservation in the Yellow Sea and the Yalu River estuary.

Hidenori Kunita
Graduated with a degree in Fisheries Science from the Faculty of Marine Science, Hokkaido University. Joined Nichirei Corporation after graduation. Worked in sales of processed seafood and distribution of freshly processed products to mass-market retailers, then became in charge of overseas processing at the headquarters and took charge of processing operations in China and Southeast Asia. Since 2006, he has been in charge of the development and promotion of shellfish products such as clams, oysters, sashimi shellfish products and seafood mixes at Nichirei Fresh Inc.
Makoto Yoshida
Member of the Marine Fisheries Group of WWF Japan. Responsible for the sustainable production of seafood imported and consumed by Japan from South America, Southeast Asia, China, and other regions, and for coordinating local nature conservation activities. In cooperation with overseas WWF staff, he is involved in various initiatives from the perspective of connecting
the marine nature where many living organisms live, and the supply chain connecting fisheries, aquaculture, distribution, and consumption.
Aiko Yamauchi
Graduated from Tokyo University of Marine Science and Technology, Department of Stock Management. Obtained a Ph.D. from the Graduate School of Marine Science and Technology. After researching examples of community-based fisheries management and joint management in the coastal fisheries in Japan, she joined Nature Conservation Office in WWF Japan. She joined Seafood Legacy in 2019. She serves as the coordinator of the Anti- IUU Forum Japan, a collaboration of domestic NGOs and other organizations.

Yamauchi: I was at Seafood Expo Global 2022, a seafood trade show held in Barcelona, Spain, this past April. There, it was announced that the clam fishery in the Yalu River estuary had become the first in China to obtain MSC certification, which made me realize that this was significant news on an international scale, beyond the boundaries of Japan and China. Could you tell us how you became involved with clam fishery in China?

Kunita: Nichirei Fresh began its clam business in 2003, and I was put in charge of it in 2006. However, sometime around 2007, an incident occurred when a large amount of shellfish toxins* were detected in clams produced in China for import to Japan. At the time, Chinese exporters had not
ensured the traceability of the origin of the clams, and Japanese importers were in a panic. Concerned about finding a way to trace the problem back to the Chinese origin, I also made an appointment with the head of the CIQ (China Entry-Exit Inspection and Quarantine Bureau) in China.

*Shellfish toxins are accumulated in the bodies of bivalve mollusks (clams, oysters, etc.) by feeding on poisonous phytoplankton.

We were told that Chinese government officials were not allowed to meet with foreign civilians, but after a little ingenuity and talking to them, we were able to find out that the shellfish poisoning originated in the Oyo River, which allowed us to import safe Chinese clams by excluding clams from that particular region.

This incident prompted us to recognize the importance of ensuring the traceability of Chinese clams, and as we continued our research and other efforts, we began to contact WWF Japan. Our findings on Chinese clams and those of the leader of WWF Japan’s Marine Group at the time were very similar, which led us to have sympathy towards them. 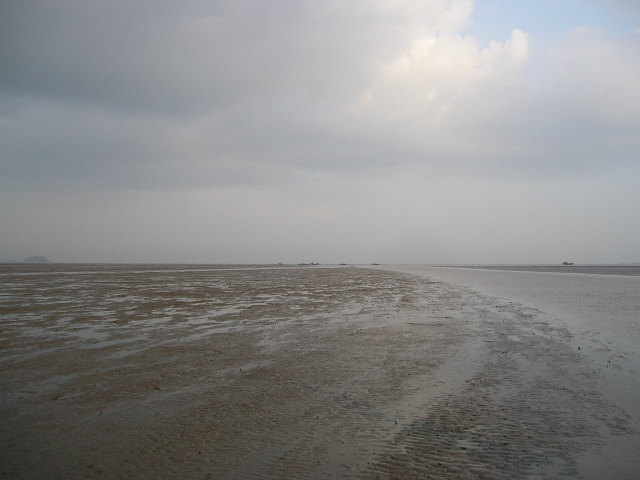 Tidal flats at the estuary of the Yalu River, Liaoning Province, where the clams are caught.

Yoshida: Recognizing the importance of the Yalu River estuary in Liaoning Province, where Taihong Foodstuff is based, as a site for migratory birds, WWF was at that time working on a project to conserve coastal wetland ecosystems through research on the connection between migratory birds, benthic organisms, and coastal fisheries.

Kunita: Another incident involving Chinese clams occurred some time later in 2011. Certain Chinese clams were found to contain pesticides. However, thanks to being able to trace the origin of the clams, Nichirei Fresh was able to quickly establish that they were safe because the company’s in-house laboratory had conducted numerous annual pesticide residue tests on the clams it imported from China, and could confirm that no pesticides had been detected.

We then investigated the circumstances surrounding this incident and found that it was caused by a sea cucumber farm. Herbicides had been used because of algae that were obstructing the sea cucumber harvesting process, affecting the nearby clams. It turned out that WWF China’s marine department was the only other organization that was able to find out the cause of the problem, demonstrating WWF China’s advanced investigative expertise.

Yamauchi: Although procuring clams can be difficult, Nichirei Fresh has persistently investigated and provided safety assurances on each occasion. When you provide safety assurance to your clients, do you also submit the data obtained from your investigations?

Kunita: While we don’t automatically provide this data to our clients, our quality assurance department regularly collects and compiles the data so that we can present it to our customers upon request to demonstrate our safety assurances.

Yamauchi: Are traceability investigations still difficult to conduct in China?

Kunita:  I think it is difficult for foreigners to conduct research in China, and this was also an obstacle for us when we were trying to acqire the MSC certification, as it is sometimes difficult for foreigners to obtain information when they try to conduct research. In the case of the sea cucumber incident, when the investigation teams from the Japanese seafood companies involved and Nichirei Fresh directly approached the local agrochemical distributors directly, they found them to be very reluctant to answer their questions. When the head of our Dalian office went there instead, we were able to get a detailed account of the situation. That’s how we found the cause of the problem.

Yamauchi: I see, so the on-site staff was instrumental in resolving the problem.

Kunita: The staff at the local office, the technical advisor who was dispatched from Nichirei Fresh to Taihong Foodstuff, and Taihong Foodstuff all played a central role in getting us through the situation. 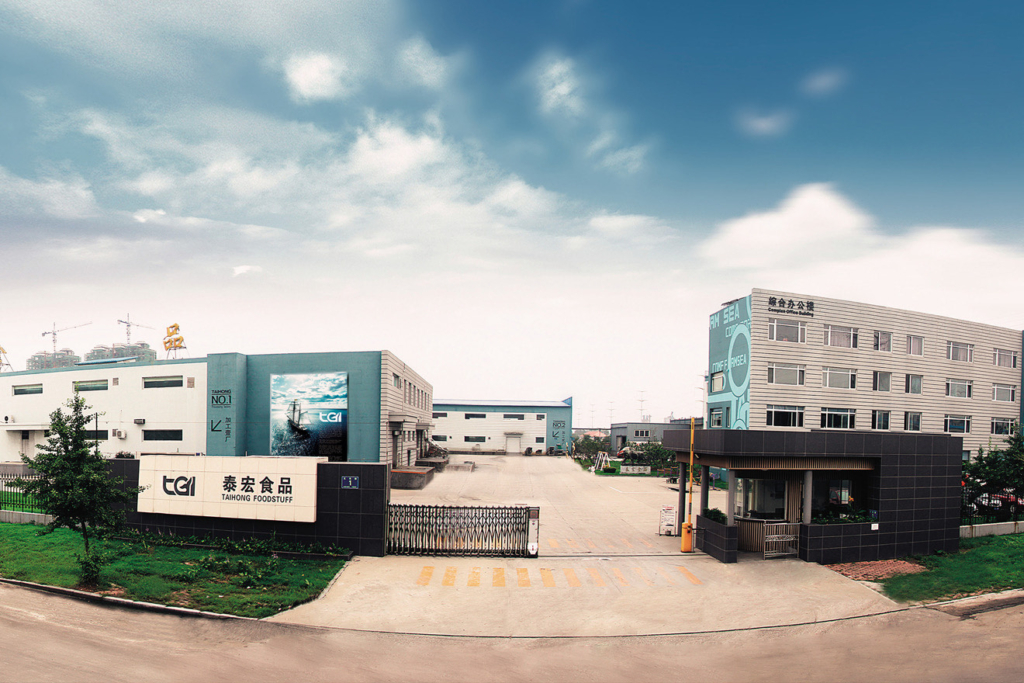 Yamauchi: Did the idea of becoming MSC certified come up around the time you established that cooperative system?

Kunita: In May 2015, we were invited to the Chinese seafood seminar held by WWF Japan at the Tokyo University of Marine Science and Technology on “Environmental Conservation in the Yellow Sea and the Sustainable Fishery Market in China Today”. There was a presentation given on the subject of acquiring the MSC certification, and we decided to work together with Taihong Foodstuff to get our clams MSC-certified. I remember that you were working for WWF Japan at that time Ms. Yamauchi.

Yamauchi: Yes, indeed. At that time, I took over as coordinator from Mr. Yasumura at WWF Japan. The Marine Fisheries Group of WWF China also gave a talk at the Chinese seafood seminar.

The MSC Certification Bringing Added Value to Our Products, Making them Specialty Products

Kunita: I remember a small incident that happened during a presentation by the marine officer of WWF China. A Chinese participant asked a question during the presentation, “By the way, do Japanese importers take good care of our Chinese clams before selling in the market ?” A professor from the Liaoning Ocean and Fisheries Science Research Institute, who was seated at the same table, intervened and said, “Don’t be rude! There are companies like Nichirei Fresh here that recognize the importance of Chinese clams and are working to import and sell them.”

I remember at that time, I realized all over again how important it is to have the right mindset with respect to distributing clams.

Since clams are scattered in the mud and stored for 18 months to 2 years, they can contain foreign matter or sand, and are one of the products that we have relatively often inquiries from our customers. Despite the problems with shellfish toxins and residual compounds, Nichirei Fresh has not had many calls to stop handling clams because of the risks involved. The company’s policy was to sell clams as a “specialty product,” with the added value of having solid safety credentials.

This decision by the company also had an impact on our decision to acquire the MSC certification. Depending on the status of the Covid-19 situation, we plan to announce that we become MSC certified again in November 2022.

Yamauchi: Moving on, I would like to ask you about the road that led to acquiring the MSC certification.