Chef Namae gave a speech at the World Oceans Day event held at the United Nations Headquarters in New York on June 8th, 2022, and was heartened by the local reception to his speech. He has also built new connections with researchers and even producers in Scandinavia through this event.
<<<Read Part 1

We spoke to Chef Namae about his thoughts concerning the issues faced by Japanese fisheries, his approach as a chef, and his vision for the future.

The need for strong leadership to bring various stakeholders together

——With imports accounting for 40% of all seafood in Japan, supply chains have become more extended and the distance between consumers and producers has become greater than before. What issues have you identified for Japan’s fisheries industry?

There are not many activities within the fisheries industry similar to the “farm to table” concept that connects farmers to consumers in agriculture. Although the main market for agricultural products in Tokyo is the Ota Market, there are alternative markets such as Radishbo-ya and Oisix Ra Daichi, which are gradually expanding in scale as they push the main market to evolve as well.

In contrast, there do not seem to be many alternative markets for seafood that can challenge the main market to improve. I also believe that strong leadership is necessary to take a holistic view of the biases that arise in different parts of the supply chain and bring together various stakeholders in order to draw up a grand design.

——As a chef, what kind of action do you think can be taken to address the issues faced by Japanese fisheries?

I believe that we should not insist on dining the fish that are in danger of extinction as there are alternatives to them. A common understanding among many chefs around me is that food culture should evolve according to the state of available resources. At our restaurant, we have stopped using egg-laying female snow crabs called “kobako-gani” out of concern for this particular resource.

We must now make further progress by breaking free of the current practice of trying to preserve what chefs were once trained in or what fishermen were physically taught to do when they were young. However, this is not something that can be changed with the power of a single individual; it requires a scientific basis on which everyone can agree and the force of mandatory policies.

I believe that science and policy are still not sufficiently aligned in Japan’s fisheries industry. Even when scientists raise a problem, it often seems that the government is not paying attention to it. I also feel that science is generally underfunded and understaffed. 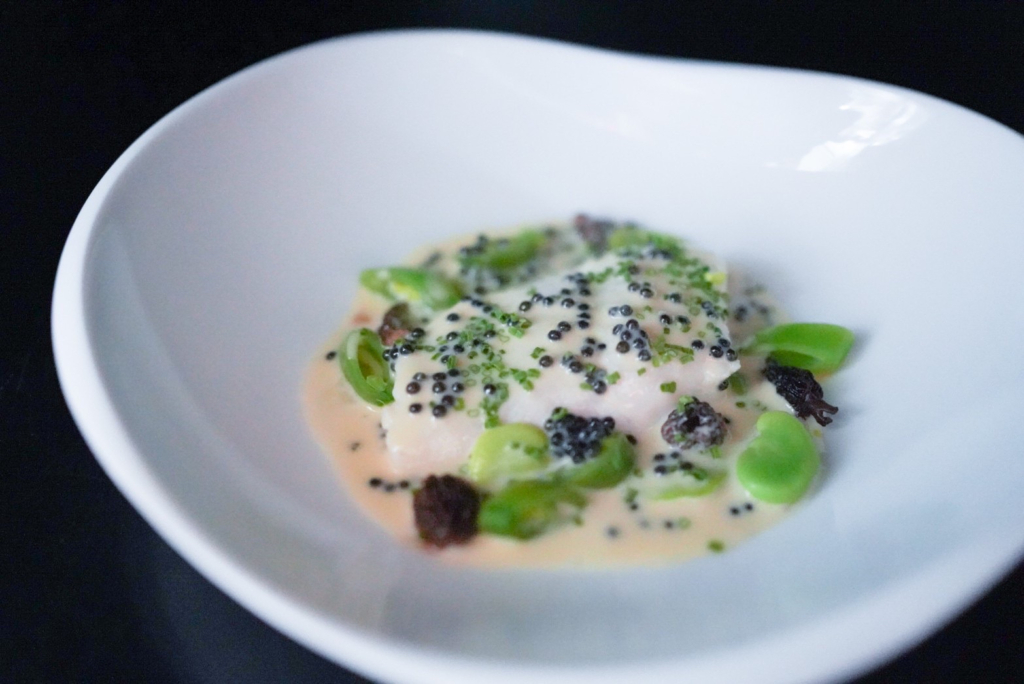 A dish prepared using silver pomfret, a testament to how the restaurant only serves seafood personally selected by Chef Namae (Photo by Yasuko Takada)

——It seems like you also began to notice certain things after taking part in the activities of the Sustainable Restaurant Association, Japan.

I was involved in the association’s “Food Made Good Sustainability Ratings,” a joint initiative with the Sustainable Restaurant Association (SRA) in the UK, which required us to answer some questions related to sustainability. One of the questions was, “If your employee engages in volunteer work on their days off, is this taken into consideration in their salary assessment?”

Chefs tend to lose touch with their surroundings because their work mainly takes place within the confines of the kitchen. However, from the perspective of being a member of society, a key theme of sustainability is to give back to the community what we have gained in some way.

This made me realize that sustainability is not just about using organic vegetables or certified fish but also includes how we engage with society. L’Effervescence has been involved in various forms of volunteer work that address the prevailing needs of society, and we intend to continue doing so moving forward. This year, we donated part of the proceeds from an event to the World Central Kitchen, which is supporting Ukraine.

*The Sustainable Restaurant Association, Japan, is a general incorporated association that supports businesses in the food service industry to operate in a sustainable manner with the aim of building a sustainable food system. It conducts ratings and campaigns in collaboration with its headquarters in the UK, which is also tasked with judging sustainable restaurant awards for the world’s best 50 restaurants. It seeks to address problems related to food systems and promote food sustainability by building communities comprising suppliers, restaurants, and consumers.

Chefs lack the ability to access raw data. However, if we do not get closer to the raw data, we will not be able to see the reality of what is happening.

We stopped serving egg-laying female snow crabs called kobako-gani last winter, a dish that had been on our menu until then. The reason for this decision is that data from researchers of fishery resources in Ishikawa Prefecture showed that the current catch of snow crab is only one-fifth to a quarter of what it used to be 60 years ago. However, because its stock is often declared to be stable when analyzing data from the past 10 years, many people out there probably do not know the truth.

Although the catch of snow crab has declined due to the introduction of the TAC system in 1997, which limits the catch for each species of fish by stipulating in advance its total allowable catch over a one-year period, the stock of snow crab has not risen in the 20 years since then.

I decided to further my studies because I wanted to equip myself with the necessary skills to proactively access raw data so that I can know the truth and take action based on this information.

——What kind of research do you conduct at the laboratory? 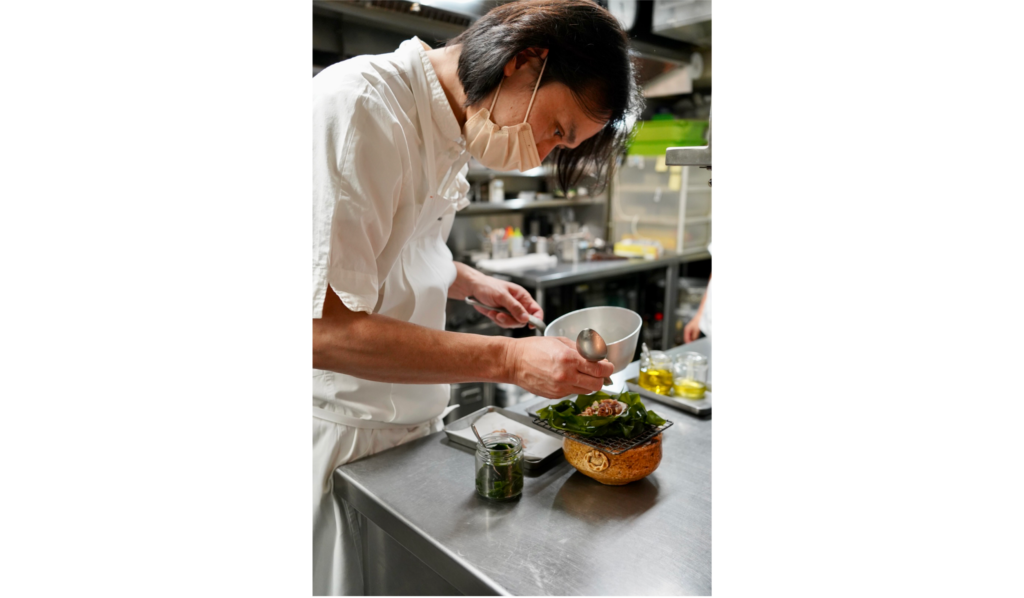 At the Laboratory of Food and Resource Economics, we study food systems, or the systems through which food and resources are moved (or distributed) from production sites. A food system is often said to distribute food from “upstream” (production sites and their surrounding environment) to “downstream” (consumers), with restaurants like ours occupying an intermediary position between the upstream and downstream parties.

I am conducting research on how the value of the food service industry, which plays this intermediary role, can be defined within a food system.

Although we are a high-end gastronomy business, there are many different kinds of businesses in the food service industry that fulfill the various needs of consumers, such as filling their stomachs, deriving joy from enjoying delicious food, and sharing food with people they want to build relationships with. However, these needs are often not differentiated properly, and the food industry is usually painted with a broad brush.

What I am trying to do is to demonstrate the value of the food service industry by sorting out the components of the industry and making these differentiations, thus defining how it can contribute to society. To do this, I have been conducting surveys of both food service providers and consumers.

——Could you tell us more about your future plans?

I intend to take a break from graduate school once I receive my master’s degree because I need to manage my restaurant, but I will continue to exchange information with my coursemates at the laboratory.

My next goal is to connect with players in different fields as well as engage in further discussions with businesses in the food service industry.

Specifically, I hope to connect with seafood distributors and retailers, researchers and activists involved with fisheries, and more fishermen and middlemen, so that we can expand collaborations beyond the boundaries of our respective fields. Moreover, if we are able to establish a forum for exchanging ideas between different groups of people, such as the researchers I have connected with at the UN World Oceans Day event and the free divers with whom I have long-standing relationships, the resulting lateral connections may develop into a new movement.

I hope to pave the way to a better future by pointing the way for the next generation while taking on new challenges by building connections that go beyond our existing boundaries. 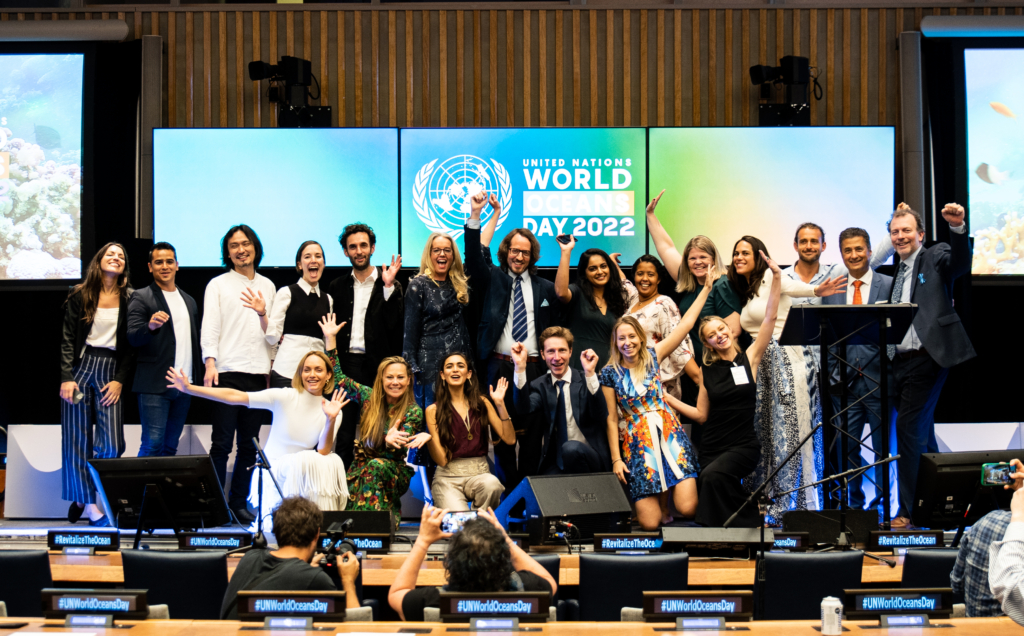 Shinobu Namae
Born in Kanagawa Prefecture in 1973, Shinobu Namae began his culinary career at Acqua Pazza in Hiroo after graduating from Keio University. He started training in French cuisine in 2003 at Michel Bras TOYA Japon in Hokkaido before joining the main restaurant Michel Bras in Laguiole, France. He was appointed as sous-chef in 2005. He then joined The Fat Duck in England in 2008 as sous-chef and pastry chef before returning to Japan in 2009. He has served as Executive Chef at L’Effervescence since the restaurant opened in 2010.
http://www.leffervescence.jp