L’Effervescence is a three-Michelin-star French restaurant located in Nishiazabu, Tokyo. Featuring Japanese ingredients and culture, the restaurant’s culinary style of exploring possibilities for Japanese people to transform French cuisine has won the support of many fans. The restaurant is also known as a leader in philanthropic activities, having made donations to disaster areas, Kodomo Shokudo (children’s cafeteria) programs, and the World Central Kitchen through various events.

Shinobu Namae has served as Executive Chef of L’Effervescence since its opening. Chef Namae was also the only Japanese panelist representing Relais & Châteaux at the World Oceans Day event held on June 8th, 2022, at the United Nations Headquarters at New York, where he gave a five-minutes speech on the subject of seaweed.

We spoke to Chef Namae about how he decided on seaweed as the topic of his speech, the reception to his speech, as well as how public awareness of sustainability is raised overseas.

Shinobu Namae
Born in Kanagawa Prefecture in 1973, Shinobu Namae began his culinary career at Acqua Pazza in Hiroo after graduating from Keio University. He started training in French cuisine in 2003 at Michel Bras TOYA Japon in Hokkaido before joining the main restaurant Michel Bras in Laguiole, France. He was appointed as sous-chef in 2005. He then joined The Fat Duck in England in 2008 as sous-chef and pastry chef before returning to Japan in 2009. He has served as Executive Chef at L’Effervescence since the restaurant opened in 2010.
http://www.leffervescence.jp

*The World Central Kitchen is a food aid NGO that provides meals to individuals and communities in crisis in the wake of natural disasters. It was founded by the chef José Andrés. It is also known for providing meals to the passengers on board the Diamond Princess cruise ship when it was quarantined at the Port of Yokohama due to COVID-19 in February 2020.

Speaking in New York on the subject of seaweed

——You participated in the World Oceans Day event held on June 8th, 2022, at the United Nations Headquarters at New York, where you gave a speech. Why did you choose to speak about seaweed in your speech?

It all started last year when Relais & Châteaux, an organization of hotels and restaurants of which L’Effervescence is a member, launched a project called “Ark of Taste” with Slow Food Nippon.

“Ark of Taste” is an initiative aimed at safeguarding the food diversity of local regions by curating traditional and unique native varieties, processed food products, and seafood caught by traditional fishing methods unique to each region that might otherwise vanish based on a set of common international guidelines, and protecting their production and consumption. We decided to launch this project in Japan to curate the ingredients that should be protected, and I mentioned wakame at the time.

Wakame and other varieties of seaweed have declined due to a phenomenon called “Isoyake”, or rocky-shore denudation, in the seas of Japan. I am often in contact with kombu fishermen on Rebun Island in Hokkaido, wakame and hijiki fishermen in Shonan, Hatahata fishermen in Akita from whom we procure ingredients for making shottsuru fish sauce for our restaurant, fishermen in Noto, Ishikawa, and other areas in Hokuriku, as well as aquaculture farms along the Tohoku coast. All of them have told me that they have been unable to harvest seaweed in the last two years.

——Does this mean that the population of seaweed has declined rapidly?

I was born in Shonan and grew up spending time in the seas since I was a child. I still regularly dive these days, and I have been struck by how rapidly seaweed has declined in recent years. I remember how my legs would get caught by the seaweed in the sea when I was a child, which was very uncomfortable, but that no longer happens today.

When I took part in a workshop conducted by a diver who has been diving and taking underwater photographs of the sea around Enoshima for 30 years, he showed us photos from 30 years ago of the kelp forests under the sea, but the photos taken today have nothing but a desert-like landscape.

The marine environment has totally changed. This is clear to everyone who has been diving, but other people are unaware of this because they do not see what is happening under the sea. I realized that this cannot go on and made it an urgent priority to raise public awareness of the current situation surrounding our seas.

I even went for training as a free diver and participated in seaweed education workshops for children in local communities alongside seaweed scientists, professional free divers, and fishermen. In my speech, I shared my own experiences while touching on how we can take on the challenge of tackling global warming by using seaweed as an example as well as the need for education moving forward. 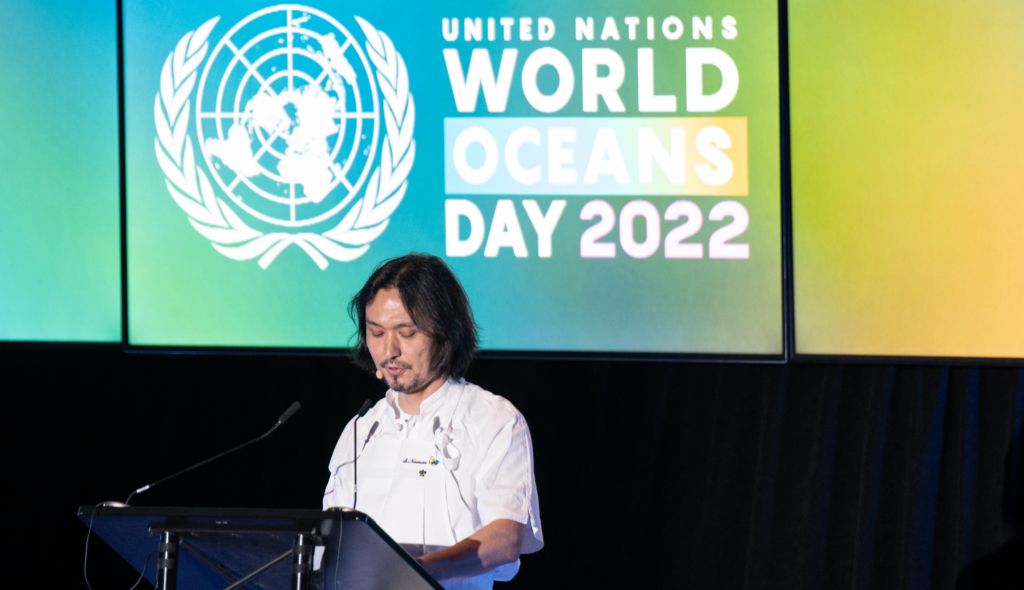 Chef Namae, the only Japanese speaker at the World Oceans Day event in New York, giving his speech

——How was the reception to your speech?

Unfortunately, the speech was not as well received within Japan, perhaps because it was delivered in English. However, I received a lot of feedback from researchers and others in the audience who were excited to learn more about the subject. I even received a message on social media from a seaweed farming company in Scandinavia, which made me realize that many people are working hard on this issue in different parts of the world.

I was also struck by the words of the marine biologist Sylvia Earle during her keynote address, who pointed out that we must prioritize restoring public awareness of the seas over revitalizing the seas. The United Nations also stated that Japanese people, who consume more seaweed than anyone else in the world, have the opportunity to lead the world in this regard, which was another sobering reminder for all of us.

Besides the event where I gave this speech, various other events were also held in New York City to commemorate World Oceans Day on June 8th and World Environment Day on June 5th. I also took part in workshops and learned many new things while building connections with other people with similar goals. I am really glad that I was at the event. 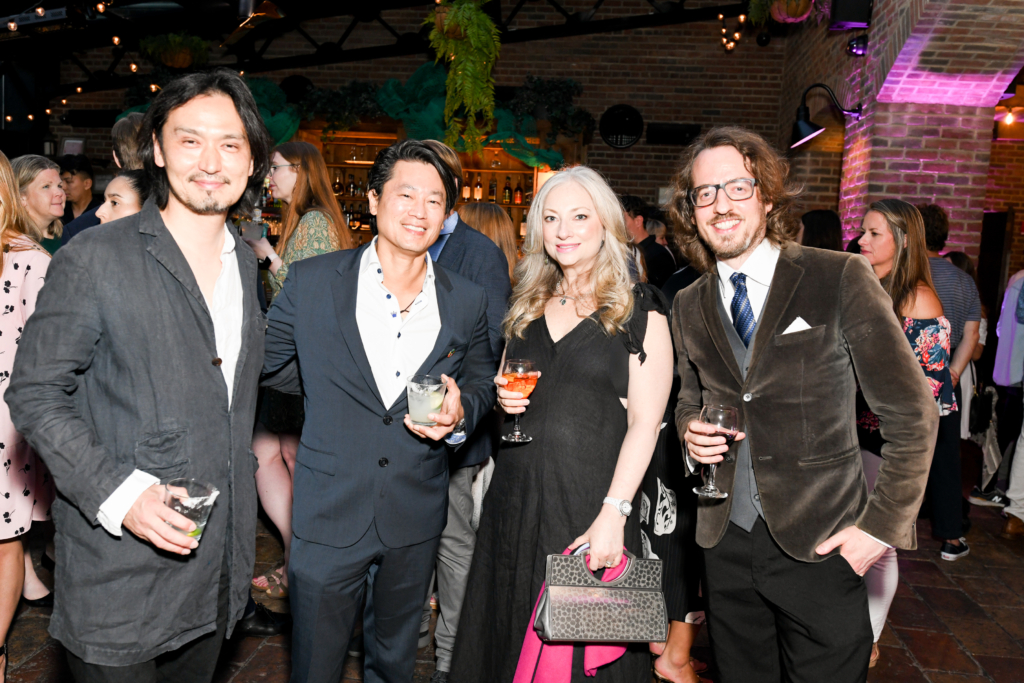 ——You have worked at restaurants in France and the UK in the past. What is your impression of public awareness of sustainability in other countries?

As far as I know, the will of the people in this regard is particularly strong in other countries. I remember something shocking that happened when I was working at a restaurant called The Fat Duck in the English suburbs from 2008 to 2009. A restaurant journalist and an owner of a restaurant in London had jointly started a petition to call for others to boycott a Japanese restaurant called Nobu London because it was serving Atlantic bluefin tuna.

There is a culture in the UK of journalists, restaurant owners, and chefs working hand in hand to assert that certain things are simply wrong. I have also read news reports that there has been a movement in certain parts of the U.S. to boycott restaurants that serve swordfish.

I believe many chefs in Japan are unaware of what is happening in restaurants around the world, partly because of the language barrier posed by English and partly because they do not make an effort to read global news. We need to work on keeping abreast of what is going on overseas so that we can improve our own bottom line. 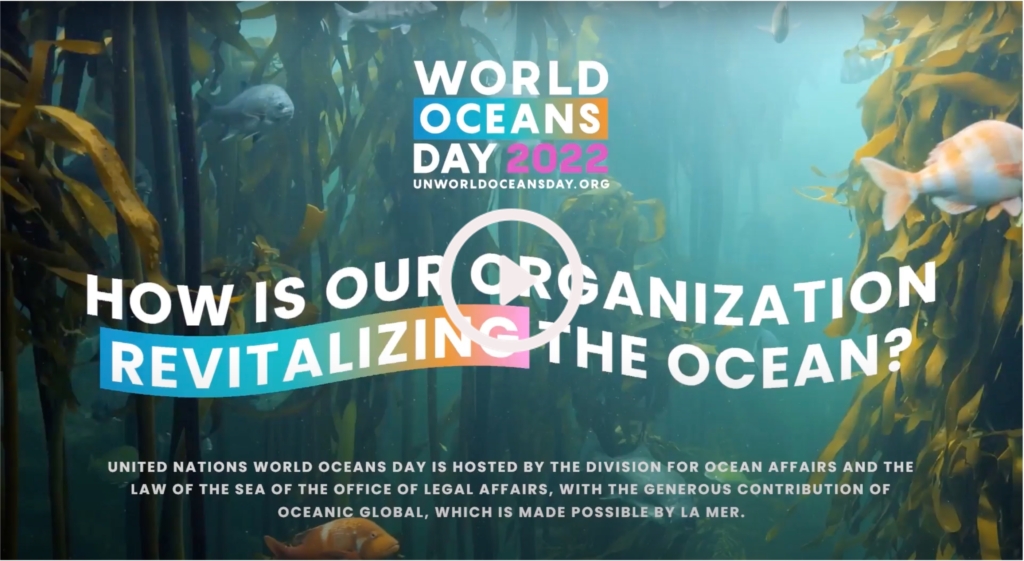 ——It seems that society’s interest in sustainability issues has grown in Japan in recent years. Do you feel that there has been any change in the reactions of diners towards the initiatives of chefs?

My gut feeling is that people around the world have become tired of hearing the word “sustainable” being bandied about. While some diners at our restaurant are happy to receive a list of producers so that they can learn about the ingredients used in the dishes, other diners are not interested in that.

Those who are not interested tell us that they know our restaurant has connections with good producers and uses good ingredients, and that they dine here because they trust us, so they do not need the information to prove that.

For me, however,  a chef is a job that connects producers and diners and one that allows us to unite in the ultimate belief that all life is important. I hope that our restaurant can encourage more diners to appreciate the importance of life.

Although it is not possible to transform the entirety of Japan in the blink of an eye, there are around 14 million people living in Tokyo. One reason why I have continued to work in Tokyo is because of my desire to reach out to these 14 million people.