The ASC (Aquaculture Stewardship Council), a non-profit organization established in 2010, has been working to certify responsible aquaculture and foster an industry-wide sustainability revolution through the use of its certification system.

Koji Yamamoto, General Manager of ASC Japan, works to promote ASC certification within Japan. Mr. Yamamoto has been involved first-hand with aquaculture practices overseas since he was still a student. Then, as a member of an international organization, he worked to improve aquaculture businesses in countries around the world. He spoke with us about the events leading to the launch of ASC Japan in 2017.

Koji Yamamoto
Born 1978 in Ibaraki Prefecture, Mr. Yamamoto holds a bachelor’s in marine biology from Bangor University (UK) and a master’s in aquaculture from James Cook University (Australia). His experience with aquaculture sites ranges over 20 countries in Asia, Africa, and other continents. Mr. Yamamoto joined the Network of Aquaculture Centres in Asia-Pacific (NACA) in 2005, the United Nations Food and Agriculture Organization (FAO) in 2010, and went on to help develop the 2011 FAO Aquaculture Certification Technology Guidelines. Since 2017, as the representative of ASC Japan, he has worked to spread ASC certification within Japan to promote responsible aquaculture that considers both environment and society.

After Highschool graduation to aquaculture on the world stage

――  Choosing to attend university in the UK was a bold decision.

I was born and raised in Japan and also took entrance exams for Japanese universities. I wasn’t sure whether to stay in Japan or go abroad but, in the end, my desire to go overseas prevailed and I decided to take the leap. I am grateful to my parents for the support that they gave me.

I liked fishing and marine sports, so I chose something related to the sea for my major. That was how I became interested in aquaculture. I wanted to become the owner of an aquaculture farm and be part of this growing field.

For the three months after graduation, I went to Ireland to live and work at an oyster farm. I then went on to pursue a master’s degree in aquaculture at an Australian graduate school. It was a practical master’s program with technical courses in such areas as pipe management and farm design. While attending graduate school, I also worked at local crayfish and barramundi farms.

In 2005, the year I finished my master’s degree, I began searching for a place to work. I received three offers from three organizations: an Australian shrimp farm, a facility in the middle of the Pacific Ocean that cultivated tropical fish, and an international organization based in Thailand called NACA (Network of Aquaculture Centres in Asia-Pacific). I decided to join NACA.

―― You choosed to work in international cooperation.

I thought it would be interesting to work in the field of shrimp farming, providing technical guidance to producers and support for fish disease control and export. I had never been to Southeast Asia.

The reality of aquaculture in Asia

――  What was it like working in Asia for the first time with NACA?

I worked at sites in Thailand, Indonesia, Bangladesh, India, and other countries. It was a time when international organizations and NGOs were collaborating to bring sustainable changes to the shrimp farming industry. NACA was implementing various programs in collaboration with the FAO (Food and Agriculture Organization of the United Nations). International NGOs such as WWF were also involved.

Mr. Yamamoto at a shrimp farm in Aceh, Indonesia as a NACA employee, together with partners involved in the Sumatra Earthquake Reconstruction Project. (Photo courtesy of Koji Yamamoto)

From around 2006, WWF began to hold round-table conferences. Producers, government officials, business officials, and other industry-adjacent professionals gathered for continuing discussions over how to improve the aquaculture industry. The shrimp farming conferences were focused in Asia, but there were also round-table conferences about various other fish species held in Africa and other countries all over the world.

When I participated in the round-table conference held in Bangkok as a stakeholder fromNACA,  I was shocked by the terrible things I heard from NGOs representing the South Asian community. Both environmentally and socially, shrimp farms were in a terrible state.

――  That’s a dark side of the aquaculture industry.

Of course, when I was a student, we learned in class about both the good and bad aspects of aquaculture. I knew in my head that, for example, mangrove forests were cut down for shrimp farming. But hearing the actual statements from those who were negatively affected by the changes and the direct remarks of the NGOs that had worked with those affected was something completely different from listening to lectures in a classroom.

――  Was it around that time that you began to think about sustainable aquaculture?

We did not use the word “sustainability” often. However, there are many small and resource-poor aquaculture businesses in Southeast Asia. From the perspective of business survival and increased production, changes were necessary in a variety of areas. If a business fails to properly manage and nurture its environment, this will come back in the end to hurt production.

For example, in situations where hundreds of small farms share the same waterway, if fish disease occurs somewhere upstream and sick shrimp are flushed into the water, farms downstream will end up bringing this disease-carrying water into their own farms. The result can be terrible. Many potential improvements required only simple changes, such as cooperating as a community to coordinate the use of water resources.

In Southeast Asian countries, there were few organizations like Japanese fisheries cooperatives. The many small aquaculture businesses were uncoordinated. By forming groups, they could prevent fish disease, increase productivity, and also buy feed as a group to reduce unit prices. Collective group production also simplifies marketing because sales can be made to processing plants in bulk. These kinds of practical changes came first. Sustainability came after.

While working on various projects in the field, and participating in creating the “FAO Technical Guidelines on Aquaculture Certification Technology”as part of NACA, in 2010, I had the opportunity to move to the FAO headquarters in Rome. As a member of the FAO administration, I was involved in writing guidelines and running meetings that brought together various stakeholders and the national fishery agencies of various countries.

Transition from an international organization employee to the ASC

――  Around the time the guidelines were issued in 2011, the ASC was established with the support of the international NGO World Wildlife Fund (WWF) and the IDH (Sustainable Trade Initiative), a Netherlands organization that promotes sustainable trade.  Please tell us how you came to join the  ASC.

The main approach of UN agencies such as the FAO is to work with the Member States to set the direction of their industries through the development of international guidelines and other initiatives. In addition to developing guidelines, for example, I was involved in technical assistance projects in Asian and African countries. However, as the main mission is to support the efforts of Member State governing bodies, there was less involvement when it came to business activities.

Mr. Yamamoto was on-site at a Zambian rice farming and freshwater aquaculture project during his time with the FAO. (Photo courtesy of Koji Yamamoto)

I mentioned earlier that forming aquaculture business groups helps simplify marketing. However, from the perspective of the FAO, this is a difficult challenge to tackle. For example, when it comes to food safety-related aquaculture management, this is something to be done by the respective governments of each country, so the FAO can give direction to producers. However, marketing is private sector work. The government can’t say, “Hey you, buy this shrimp.”

While I was in charge of the project, it was difficult to make things happen on the business side, and I was searching for a different approach. In that sense, ASC certification is a certification system that makes good use of the market’s strengths. I happened to see an announcement on the internet saying, “Recruiting Management to Start a New ASC Office in Japan.” It seemed interesting to me, and I applied instinctively.

Five years since the launch of ASC Japan

――  Does this mean that the spread of ASC certification in Japan began in earnest after you launched ASC Japan in 2017?

No, it began even before that. WWF Japan had already been supporting ASC activities, and the CoC certification required for distribution was covered by the MSC office.

In 2014, Aeon introduced ASC-certified products and some in the fisheries industry began to handle them. That was a time when the sustainable seafood market in Japan had gradually begun to expand. Tokyo had been chosen to hold the 2020 Olympic and Paralympic Games, and in 2016, some years after the 2011 earthquake disaster, an oyster farm that was part of the JF Shizugawa fishery cooperative in Miyagi Prefecture received Japan’s first ASC certification.

It was a pity that the Olympics could not bring many of their planned activities to fruition due to the COVID-19 pandemic. However, with SDGs promotion and the revision to the Fisheries Law, it feels like the world has been changing quickly these past few years. An increasing number of fishery businesses and other organizations have come to use ASC certification. In the field, there are an increasing number of aquaculture farms and fish species that have become ASC certified.

――  It’s been about 5 years since the launch of ASC Japan. How are things going?

Currently, there are three of us. I mainly take a holistic view while also working with production sites. One staff member then handles market-related aspects such as business visits and another member handles public relations. 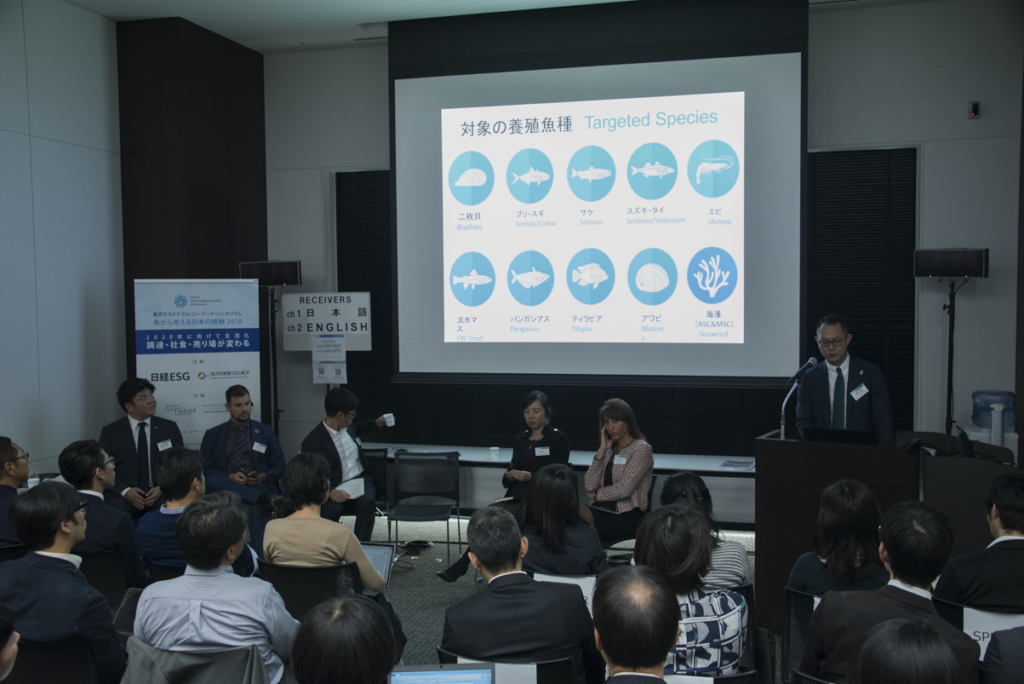 Mr. Yamamoto on stage at the Tokyo Sustainable Seafood Symposium 2018.

The first two years after we started the office were difficult. But I believe I was fortunate. Many organizations and groups were already working in the field before I came to Japan. I am truly grateful that our partners and the world at large are headed in the same direction.