Haruhiko Ito heads a major wholesaler* at Toyosu Market, the world’s largest market. Meanwhile, Wakao Hanaoka started a social venture aiming for a sustainable and bountiful ocean. For New Year’s 2022, they met and discussed how Japanese seafood industry should change and the problems and prospects. Following Part 1, they continue their discussion on electronic traceability.

*Chuo Gyorui is a special wholesaler that has a license from the Minister of Agriculture, Forestry and Fisheries to sell items from producers in comission.

Increase the Number of Believers and Start Tackling the Problems

Hanaoka: Chuo Gyorui handles about 25 percent of the fish that comes to Toyosu Market from all over the world. If you can ensure the traceability of the products you handle and get the entire Toyosu Market and supply chain involved, it would be a huge step in eradicating IUU fishing and restoring fishery resources in Japan and the world. What are the hurdles in electronic traceability?

Ito: One problem is that many people don’t really want change. They are happy with the way they do now, using paper slips, etc. Unless it is beneficial, they won’t change even if I make a proposal for change. Although there might be no major, immediate benefit, things would improve overall if every individual does his or her small part. Even when I explain this, it is difficult to make them understand. This is why I think we first need to have many believers as the first step for change.

Hanaoka: It’s certainly important to have more believers. Converting to an electronic system would improve work efficiency, and the enormous amount of data collected would be very valuable. It would be a solution and a new business opportunity. Also, by working with the entire Toyosu Market and not differentiating internally, the amount and value of the collected data would increase. Toyosu Market itself will also become more credible. I think it’s a great idea. What other problems do you want to resolve from now on?

Toyosu Market is not only the largest public market in Japan, but also the largest in the world. (Photo courtesy of Chuo Gyorui Co., Ltd.)

Ito: There’s a mountain of challenges, including those we haven’t even addressed yet. First of all, fish which was abundant in the past is now decreasing. This includes the Pacific saury which everyone knows. The decrease in saury is partly due to the higher sea temperature caused by climate change and catch competition with foreign countries. However, I have serious reservations regarding the current practice of catching saury while they are still small. I don’t think it’s best for the planet.

I believe that much of the global warming is caused by people burning a lot of fossil fuels. Under such circumstances, what should we do? We haven’t yet taken clear action, but I strongly believe that we must at least work toward achieving the SDGs.

Another looming problem is that Japan’s per capita consumption of seafood is decreasing every year. Meat is easy to cook and inexpensive, making it very popular. I want to do something soon to encourage more seafood consumption. We don’t want Japan’s seafood culture to disappear.

Why is Fish Priced Differently? Stock Management Needed in Japan

Hanaoka: Regarding stock management, what are your thoughts on overfishing?

Ito: For example, Japan currently imports 45,700 tons of mackerel from Norway with an average price of about ¥220 per kilogram. Meanwhile, mackerel caught in Japan (for export) trading in Choshi (Chiba Prefecture), etc., has a low price of ¥110/kg (according to trade statistics and Norwegian export statistics). Why is there such a price difference?

With stock management, Norway implements a system of catching only fatty mackerel. They also have a good selection system for mackerel so only quality mackerel is exported to Japan. Meanwhile, Japan uses purse seine nets to catch mackerel while they are small, before they become fatty. It is priced cheaply in bulk and normally sold to African countries instead of developed countries. Is this how a country effectively using its resources does business?

In Norway, they manage their stocks and catch only the delicious and highly valued fish. Instead of catching fish when they are small, they let them grow in the sea and catch them when they get big. Such an obvious thing is not done in Japan. I think we need to learn from Norway and have people in Japan happily eat a lot of mackerel grown in Japan.

Hanaoka: I really share your sentiments. Japan has a lot of mackerel right here in its own waters, but we eat mackerel imported from the other side of the world. The mackerel caught in Japan is sold cheaply to Africa instead. It’s such a shame. The shipping of the mackerel also generates greenhouse gases in a vicious cycle.

Ito: It might not be perfect now, but many people think that it should change with the times like the revision of the Fisheries Act. Without rejecting the changes, I plan to proceed step-by-step with whatever I can do in my position for the fishery industry to become what it should be.

*MSY (Maximum Sustainable Yield): The maximum (or high amount) catch that can be sustained while the current biological and non-biological environmental conditions can be maintained for the fish stock. 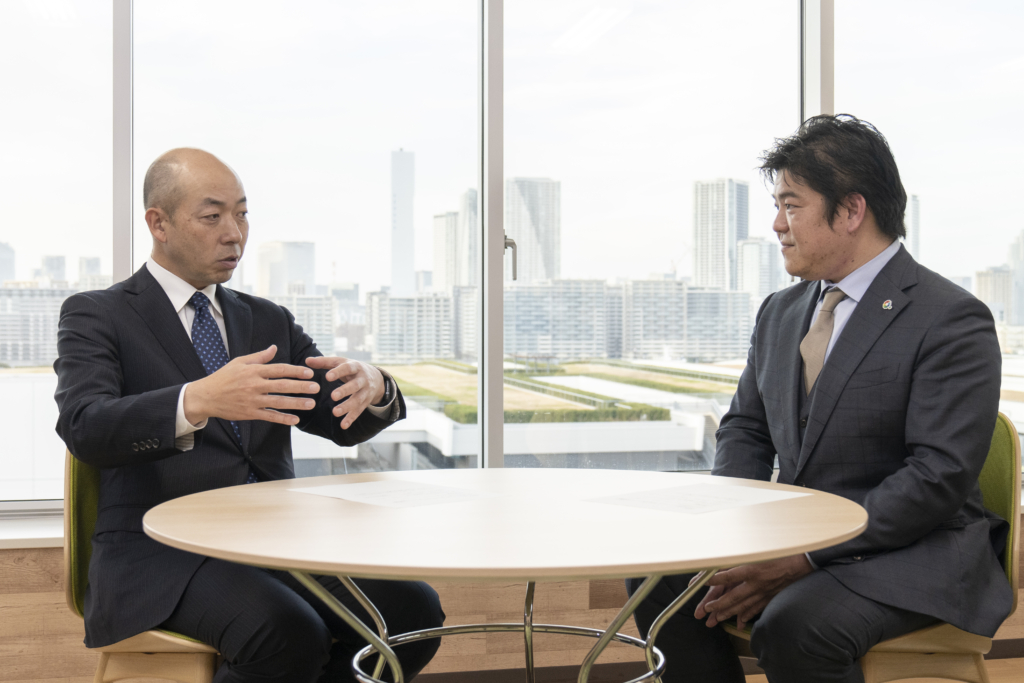 Toyosu Market Advancing in the spirit of “Sanpo-yoshi” (Good for seller, buyer and society)

Hanaoka: How do you think the Toyosu Market should change in the future, especially in terms of sustainability?

Ito: Market is the middleman in the distribution channel. It cannot work alone but needs people who catch fish, people who producefish (aquaculture), people who buy fish, and people who eat fish. Everyone involved strives for the best. I think it is important to always work in the spirit of “Sanpo-yoshi” (good for seller, buyer, and society).

To this end, it is important to provide higher quality products at lower prices. Since this is our livelihood, I want to try and lower costs one by one as much as possible.

For example, in the distribution channel, if products come through multiple centers, the cost will increase. Therefore, when everything comes through Toyosu Market where we can do all the packaging, processing, etc., as desired by the customer, the cost will be lower and more sustainable. Through such style of work, I hope to see Toyosu Market develop further.

Alliance of People Aiming for a Sustainable and Bountiful Ocean

Hanaoka: I grew up abroad. It was when sushi became hugely popular in countries where eating raw fish was uncommon. Japanese food became a world-class cuisine, so even as a child, I thought Japanese food was amazing.

However, whenever I go to international fisheries conferences, Japan is treated as a villain, even today. Japan certainly has had a history of overfishing in the world’s oceans. So I often used to feel regret as a Japanese national at these conferences. Even in the case of the Pacific saury, prices increase when the catch decreases. Therefore, it is necessary for us to work together internationally to manage fisheries resources and ensure a stable supply from the sea.

Although Japan’s population is declining, the world population is steadily increasing. Since producing food on land is limited, it is essential to increase food from the ocean. The ocean around Japan is bountiful, one of the world’s three major fishing grounds. If we properly manage our fisheries resources, they will increase. We at Seafood Legacy aim for properly managed fisheries, a higher consumption of seafood per capita in Japan, the prevention of world hunger, and an affluent society.

Hanaoka: I want Japan to be identified with achieving sustainability of its entire seafood industry, including fishing and distribution, and showing the world a sustainable relationship between the ocean and people. To this end, I think Toyosu Market is iconic and central for the actual fisheries distribution. While talking with you, I feel even more that we can realize this dream.

Ito: To realize such a dream, Seafood Legacy cannot do it alone, nor can Chuo Gyorui do it alone. It is important for many people in the seafood industry to join hands and work together toward a common goal. I want more people to join the alliance created by Seafood Legacy.

Haruhiko Ito
Born 1967 in Tokyo. While a student at Nihon University College of Agriculture and Veterinary Medicine, he studied abroad at University of Alaska in the U.S. to study the salmon run for a year. After graduating, he joined Nichirei Corporation and worked in industrial frozen foods.
In 2000, he started working for Chuo Gyorui Co., Ltd. and became president of the company in 2018. As the company’s Chief Operating Officer (COO) within the Marunaka Group of diverse companies with large refrigeration equipment and distribution centers, he is determined to optimize the synergy and collaboration between group companies to develop as a comprehensive wholesaler centering on seafood.

Wakao Hanaoka
Born 1977 in Yamanashi Prefecture. Grew up in Singapore. After graduating in Ocean Engineering and Marine Sciences at Florida Institute of Technology, he engaged in marine environment conservation projects in the Maldives and Malaysia. From 2007, he took on marine ecosystem issues at an international environmental NGO and became a campaign manager before going independent.
In July 2015, he established Seafood Legacy Co., Ltd. and became its president. While networking with diverse stakeholders including Japanese and foreign companies, NGOs, governments, politicians, academia, and the media, he works on the design of local solutions in accordance with international standards suiting Japan’s environment.