(Continued from part 1) Coastal skipjack tuna pole and line fishing is an ancient practice. Although the number of fishing boats which use this traditional method to support Japan’s food culture have declined since its heyday, they remain proud to do so. They have created a partnership which transcends prefectural borders to pass on this fishing method to the next generation, to protect the environment and continue producing high quality fish.
<<<Read Part 1

–What was the biggest hurdle to acquiring MSC certification?

Tanaka: The hardest thing for us was getting our fellow fishermen to understand MSC. “What is MSC? Will it help me make money?” they would ask. To which we would respond, “It might not help you make more money, but we have to do it for the future.” They didn’t really understand.

As I mentioned earlier, although all of the coastal skipjack tuna pole and line fishing boats passed the MSC preliminary inspection, many of them did not want to undergo the main inspection due to costs and other issues. Taking on a new challenge comes with risks and requires money, so it takes courage. Nevertheless, Nango Fishery Cooperative was willing to cooperate with us. The biggest factor was that the young captains were vocal in pushing everyone forward. I was also told by the younger captains, “Mr. Tanaka, we have to do it!”

We don’t even know everything  about MSC. I wish that MSC was a bit more transparent to fishermen like us, and that information was communicated to those who work in the field. Also, distributing certified fish requires that our brokers also understand MSC.

–That sounds difficult. With so many people involved, it would be hard to have the same understanding and sense of things…

Tanaka: It is challenging. Money is also very important. In the past, companies which make plenty of money have gone straight for MSC certification, but captains like us are barely scraping by, so it’s quite hard.

–You mentioned that by joining together for this project, you were able to reduce the individual costs.

Suzuki: I think so. The main inspection cost 10 million yen, which is beyond the ability of a single boat to pay. By forming a group, the cost was reduced to a few hundred thousand yen per boat. A difference of two digits is quite significant. If more boats had joined, we could have brought it down even further…I’d like have more boats join in the future.

Tanaka: In the future I’d like to invite all coastal skipjack tuna pole and line fishing boats to join: those from Mie and Shizuoka, as well as those boats from Kochi and Miyazaki which haven’t joined yet. If all those boats acquired MSC certification, then I expect the number of distributors with CoC certification would also increase.

Eto: I would like the price of MSC-certified raw skipjack tuna to go up a bit. If that happened, I would be able to invite other fishermen and get them to join the project. 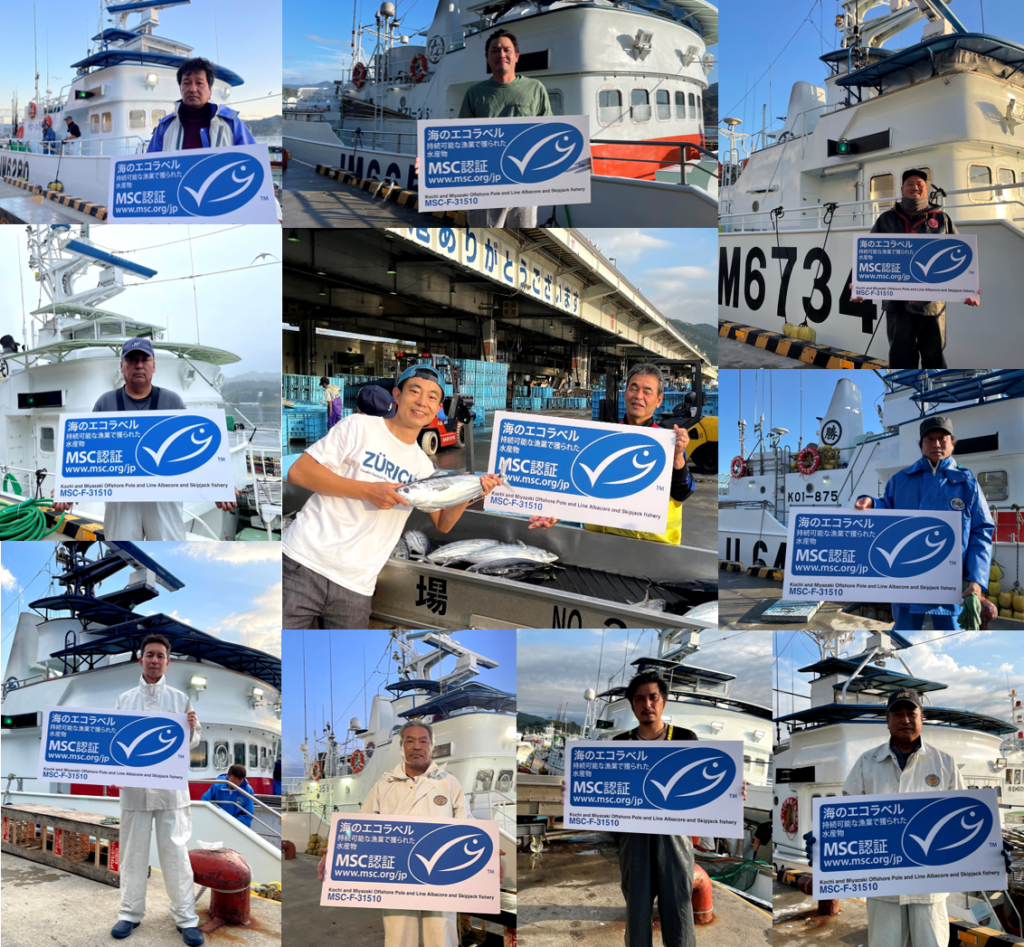 18 boats have joined this project. Each boat operates independently, so it is rare for boats from different prefectures to see each other. 10 of the 18 captains agreed to pose for commemorative photos holding the MSC sign when they were in port.

An Unbroken Chain from Fishing Boat to Consumer

Tanaka: Getting the MSC Fisheries Standard certification is all well and good, but distribution is also an issue. Even if the fishery has certification, they can’t distribute certified fish. For this project, Mr. Suzuki visited the brokers quite a lot…

But this month the last link in the chain was connected! Several large brokerage firms in Kesennuma got their CoC certification. It’s still a small percentage of the whole, but they handle a fairly large volume.

Although we received the award in the Collaboration Division for this project, the true collaboration is still to come. The award has gotten us into articles here and there, and we are becoming better known. The next step is to increase collaboration among fisheries and brokers and form more partnerships with restaurants and supermarkets.

*CoC certification guarantees that a fishery resource is properly managed through the entire process of manufacturing, processing, and distribution; it also guarantees that no uncertified ingredients are mixed in and that the product label is not falsified. If a non-CoC-certified business is involved anywhere in the distribution process, then the product cannot be treated as certified beyond that point.

Shining the Spotlight on Pole and Line Fishing and Skipjack Culture

–There is still much to be done in the next step, isn’t there?

Suzuki: In addition to partnerships with distributors, we also need to form bonds with the consumers. We not only want to tell people that we are sustainable fisheries, but we also want to show them what skipjack tuna pole and line fishing is really like.

Currently, if you ask a normal consumer about Kochi and Miyazaki skipjack tuna caught by pole and line fishing, they won’t have any idea what you’re talking about. The reason is that skipjack tuna sashimi sold in supermarkets is labeled as “Product of Chiba” or “Product of Miyagi” for fish offloaded in Katsuura or Kesennuma, respectively.

People know about Tosa no Ippondzuri, but there’s no connection to the sashimi sold in supermarkets. If people knew that Chiba and Miyagi were just the offloading ports, and that in fact boats from Kochi and Miyagi follow the skipjack tuna up along the Kuroshio Current, with the fishermen living on their boats as they catch the fish, they would say “That’s amazing!” But that story is not currently visible.

Skipjack tuna is used not only for sashimi, but for katsuobushi flakes, which in turn are used as the base for dashi stock, one of the foundations of Japanese cuisine. If we couldn’t fish skipjack anymore—because either the fish or the fishermen disappeared—Japanese people’s diets would be significantly affected. 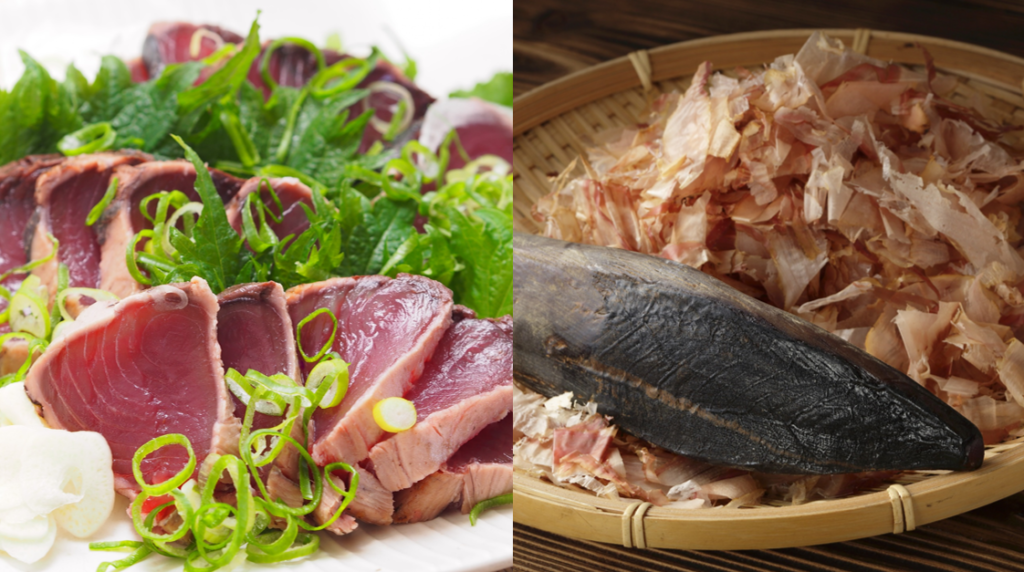 Skipjack tuna has underpinned Japanese food for ages, from seasonal sashimi to katsuobushi flakes, the cornerstone of Japanese cuisine.

Making an Everyday Fish into a Certified Sustainable Product

–With your certification, the image people have of MSC might change.

Suzuki: That’s true; MSC certification might become more familiar. In the past, if you wanted to choose sustainable, internationally certified fishery products, your only choices were fish from outside Japan. We have successfully shown that it is possible for traditional Japanese fisheries to acquire MSC certification.

Tanaka: Although the numbers have declined, it used to be that 80-90% of fresh skipjack tuna sold was caught by coastal pole and line fishing. Following this project, if more and more skipjack becomes MSC certified, it will add up to quite a large volume. That is the difference with past MSC-certified products: having MSC certification for skipjack tuna which can be found on just about any dinner table across Japan. This is the first step in having a certified mark applied to this everyday food showing that it is in fact sustainable.