The Marine Stewardship Council (MSC) was established in London in 1997 as a non-profit organization, under the vision of “the world’s oceans teeming with life, and seafood supplies safeguarded for this and future generations.” It has worked to promote sustainable fishing through its certification system. There are currently 441 MSC certified fisheries worldwide, although in Japan there are still only 12 (as of August 31, 2021).

Kozo Ishii
Born in Hyogo Prefecture in 1964. After graduating from the National Fisheries University, he worked for a food products company and earned a Master of Public Affairs in Environmental Policy and Natural Resources Management from Indiana University in the U.S. After 1997, he worked on regional development and environmental projects in developing countries as a senior researcher at the International Development Center of Japan. Since the establishment of the MSC Japan office in May 2007, he has been working as Program Director to promote MSC certification and MSC ecolabelling for seafood products in Japan.

A new career turning point and introduction to the MSC

―― Were you always interested in the sea and fish?

I was born and raised in the west end of Kobe, with the sea and Awaji Island right in front of me. I have loved eating fish and fishing since I was a child, so I attended the National Fisheries University and took a job at a food company.

My life as a company employee went well, but I wanted to do work related to international cooperation, and for that I needed a specialization. Also, environmental issues such as global warming were starting to emerge in the 1990s, but when I talked about it with people around me, they would say, “Huh? There’s no such thing,” and not take me seriously, which was very frustrating. At that point, I decided to study environmental policy and resource management in graduate school, and at the age of 30, I quit my job and went to study in the U.S.

―― That must have been a big turning point. You earned a master’s degree in the U.S., and after returning to Japan, you got a job in international cooperation, which had been your dream. Was it around that time that you were first introduced to the MSC?

Although I have been away from  the fishing industry for a while, around 2003, while working on development projects in developing countries, I started thinking about fishing as one of the issues facing the entire region. For example, the number of fish in Tonle Sap Lake in Cambodia is decreasing. 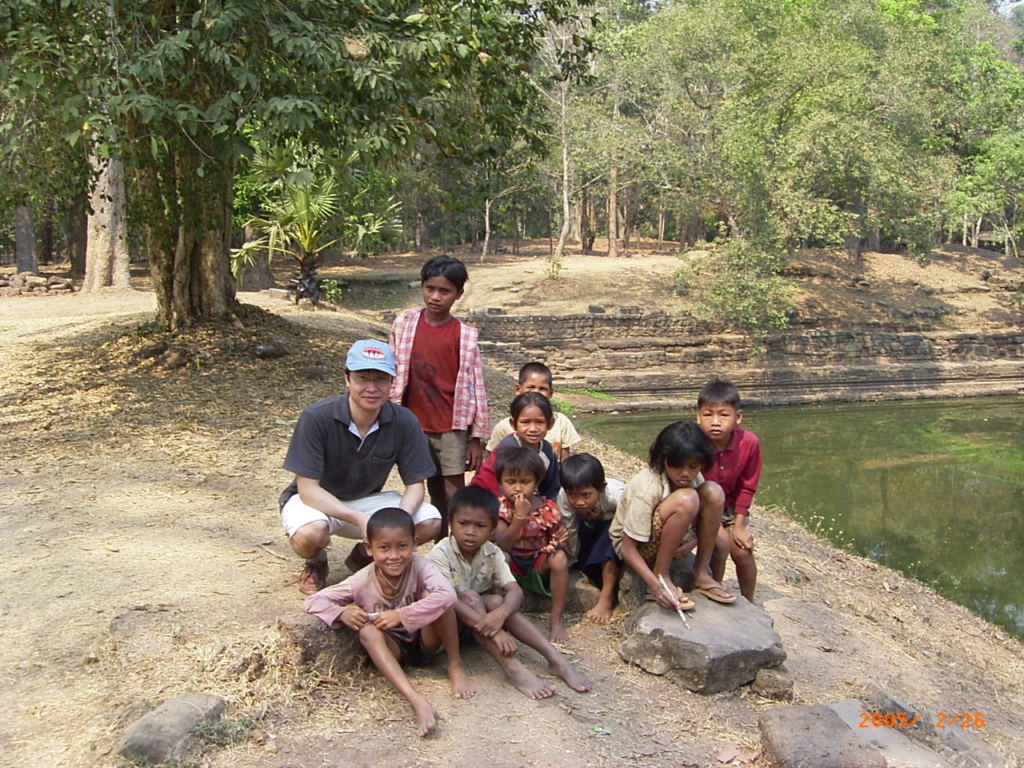 Mr. Ishii in 2005, when he was involved in a community development project in Cambodia. He is together with local children. (Photo provided by Kozo Ishii)

When I went somewhere for a project, I usually stayed for two or three months, and typically had some free time in the evenings. One night I was browsing the Internet and happened to come across MSC, and I was surprised when I read about what they did. They provide certification, attach an ecolabel to certified products, and then let people decide whether they want to buy the products. I thought this was an amazing way to initiate change from within the market. It seemed to me like a system that could really work well.

As I continued reading more details, I saw that they were looking for Japanese staff. I felt like this was my true calling, a position that was meant for me, which I had to apply for!

There still was not really a sense of crisis about fisheries in Japan, but people had started to talk about certain species of fish around that time. I thought that if we did not take action quickly, it would be too late.

Looking back to when the Japan office first opened

―― It must have been quite a challenge when you were hired by MSC in 2007 and had to set up the Japan office by yourself.

Because of my previous work experience, I don’t recall having much difficulty in the procedural aspects of setting up the office, but I was unsure of how to disseminate about MSC and raise people’s awareness.

―― What kind of plans did you start with?

First, we worked diligently on translating press releases issued by the MSC headquarters and sending them to be picked up by seafood industry journals.

As far as working with companies, there were some pioneering companies that had already obtained CoC certification, so I actively contacted them and set up meetings with them. I had never been so happy to have graduated from the National Fisheries University as I was back then. There were alumni everywhere I went, and although I didn’t want to rely on those relationships too much, I received a lot of help from people reaching out to others and introducing me to them.

However, it was hard doing everything by myself. I had to do PR work, handle operational tasks, and explain to fishermen how the certification works. On top of that, I would start getting emails from overseas after business hours in Japan were over, and back then, I would do my best to reply on the same day. Now, though, I only work during Japanese business hours (laughs).

―― When did you start hiring staff?

A year after the office opened, I started looking for staff to handle work with fisheries. It was my first time hiring others, so it was quite difficult for me. Over the past few years, we have finally established a stable team of seven people. As our numbers increased and we outgrew our office, we moved to a new office in 2016, and in 2020 we formed MSC Japan as a General Incorporated Association.

―― You are still using the title of “Program Director” though.

In terms of the corporate structure, I am technically the Representative Director, but in terms of work for the MSC, since the very beginning, I have always been the Program Director. I am still not entirely sure why they call it that (laughs), but apparently the MSC considers the work in each country to be a single program, and in my case, it is the Japan Program. Each country has a program director. 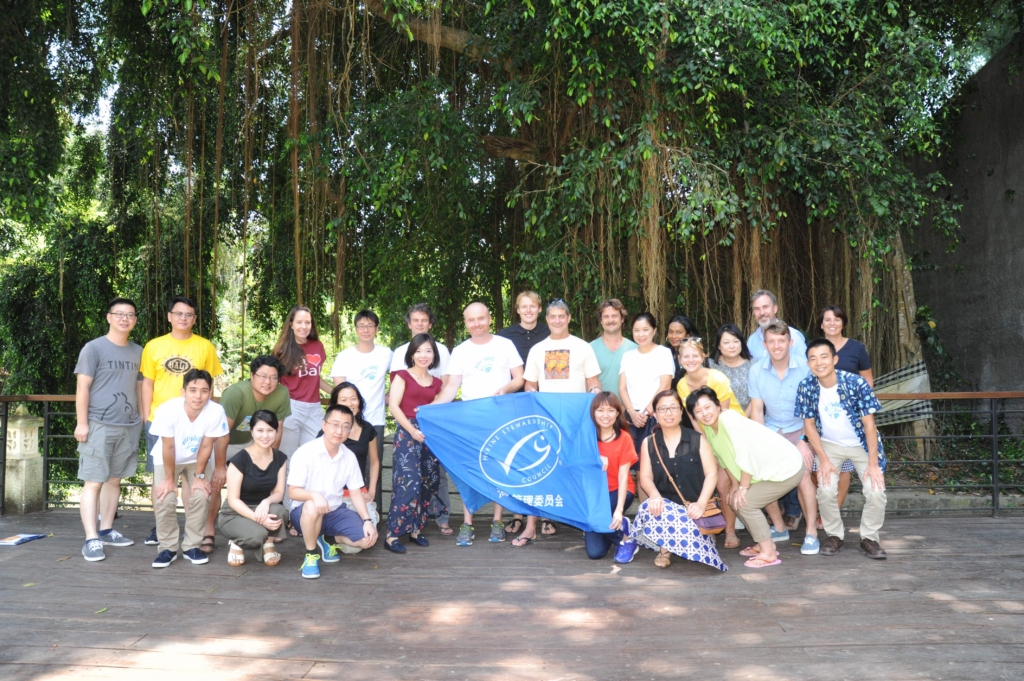 In Bali, 2017. Together with staff from MSC headquarters and from the Asia-Pacific region. Back row, fourth from left. ©MSC Japan

―― When approaching companies, how was the response towards adopting MSC certification?

Aeon in 2006, and then the Japanese Consumers’ Cooperative Union in 2007 started handling products with the MSC-certified ecolabel, but CoC certification was required in order to sell certified products there. At that time, most of the companies were asked by retailers to obtain CoC certification, and I think they felt that they had no other choice. It did not spread much further than that, and even when we talked to new companies, they generally felt that they did not need it, and it was hard to get them to work with us.

In 2010, partly due to efforts such as the formulation of “Aeon Biodiversity Principle”, and where I thought that we could succeed in gradually expanding MSC certification, but then the Great East Japan Earthquake struck in 2011. Regions with particularly strong fishing operations were severely impacted, so people felt that MSC certification was the least of their worries, given the situation.

When I told the more experienced staff at headquarters that we were having difficulty promoting MSC certification in Japan, they said, “No, no, Kozo, it will come.” They said that even in Europe, it did not take off until 2006, ten years after the establishment of the MSC. According to them, a chance was sure to come eventually, and things would soon pick up in Japan too…

Indeed, after the SDGs were adopted by the UN in 2015 and the Rio 2016 Olympics ended, MSC certification started to spread rapidly in Japan. This was around the time when work began on creating a procurement policy for the Tokyo 2020 Olympics, and also when the media began to report that in addition to a few specific species such as Pacific bluefin tuna and Japanese eel, other popular seafood species such as Pacific saury and Pacific flying squid were also starting to become difficult to catch. It seemed like Japanese companies and people involved in the fishing industry were finally starting to become aware of the crisis of fishery resources depletion.

I feel that several overlapping trends came together at that point in time. It has been nearly ten years since the opening of the MSC Japan office.