The duty to provide seafood to the nobles at Edo Castle in the past led to the rapid development of a thriving food culture that include sushi, tempura, tsukudani stew, and seaweed, as well as the fishing activities in the “Edomae” (bay of Edo; currently Tokyo Bay) region that create it. As time passed, the “Edomae” region kept expanding, and at present is defined as the entire Tokyo Bay according to Japan’s Fisheries Agency.

Inheriting the “Fisherman’s Spirit” from his grandfather and father, Mr. Kazuhiko Ohno is a third generation fisherman in Funabashi, Chiba Prefecture, and is one of the leaders of Tokyo Bay purse seine fishing. Mr. Ohno’s “Edomae Shun-jime Suzuki (Sea Perch)” brings out the original value and taste of the fish and his fishery was given the green light to be a supplier to the Tokyo 2020 Games.

We interviewed Mr. Ohno about Japan’s first Fishery Improvement Project (FIP) that he initiated in his mission to improve fisheries management, which stemmed from the ambition to become a supplier for the Tokyo 2020 Games.

Kazuhiko Ohno
6th Chief Fisherman of Daiden-maru. Kazuhiko Ono Graduated from university and joined Daidenmaru Ltd, which was established by his father in 1982. He established Kaiko Bussan Ltd. in 1989. In 1993, he became the CEO of both companies. In 2014, he named the method of instantaneously draining the blood and removing the nerves from sea perch “Shun-jime” and sold them under the brand “Edomae Funabashi Shun-jime Sea Perch”, which has been designated as one of the “Chiba Prefecture Branded Seafood” and chosen as one of the National Pride Fish (Summer). In 2016, he announced the initiation of the first Fishery Improvement Project (FIP) in Japan. In 2018, Kaiko Bussan Ltd. acquired the Marine Ecolabel Japan (MEL) Ver. 1 and currently applying for Ver. 2 of the same standard.

Where did the “Edomae Shun-jime Sea Perch” that was intended for the Tokyo 2020 Games go?

—Two years ago, the Games were delayed due to the spread of COVID-19. What did you do with the “Shun-jime” sea perch which you had prepared for the event?

As they are frozen filets, we could have kept it fresh for up to a year and still supply it to the Tokyo 2020 Games at a later date but we could not stain our pride as Edomae fishermen by supplying old stock. While trying to sell off the enormous stock, we got a suggestion to provide it to Kawasaki Frontale football players who are representing Japan in the Games.

So, we supplied them with the “Edomae Shun-jime Sea Perchi” that had nowhere else to go and they actually won (the J1 League) (laugh). Thanks to that positive dealing, we will be supplying them with our sea perch again this year. 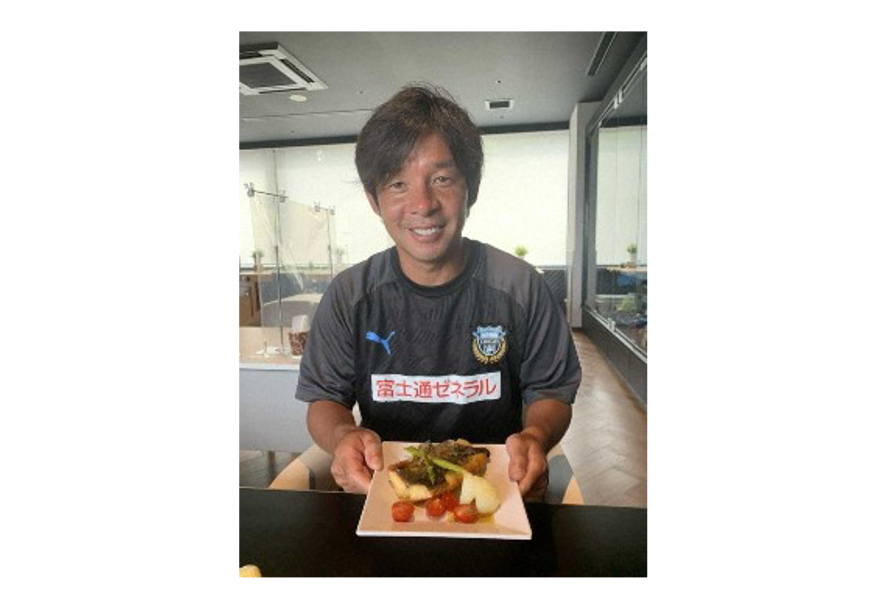 The local franchised sushi restaurants in Funabashi also bought a lot of it. Other than that, Chiba Prefecture also launched a campaign to serve high-grade seafood that had nowhere to go due to the COVID-19 pandemic as school lunches at elementary and junior high schools, which helped us sell 10,000 servings of sea perch. We even ran out of stock and had to supplement it with what we caught last year. Apparently, they also served Japanese spiny lobsters and ​​​​splendid alfonsino for school lunches. Now, that’s excellent policy making.

—Please tell us how the Tokyo 2020 Games got you to initiate the Fishery Improvement Project.

In 2013, when Mr. Jacques Rogge, the President of IOC at the time, announced that “Tokyo” would be the host of the 2020 Olympics, I thought “Hurray! This is the perfect chance. If we supply the event with our fish, the whole world will recognize the high quality of our fish. This is our chance to make Edomae fish popular worldwide.”

However, Mr. Makoto Suzuki at MSC Japan (at that time) told me “It’s not that easy to supply fish to the Games.” He told me it needs to be “sustainable.” My first thought was, “What on earth is that?”

That was the first time I learned about the “MSC certification” for certified sustainable seafood, so I took the pre-assessment. As we were already taking initiatives such as avoiding the capture of small fish and not fishing during the spawning season for several years up until then, I had confidence that we would be certified.

However, the result of the pre-assessment was, “While the initiatives are commendable, there is zero effort in managing stocks such as establishing rules with other fisheries and showing it to the community.” While what they said is true, I was honestly quite disappointed that we failed the assessment.

—And yet you decided to get the MSC certification in spite of that disappointment.

Since the London 2012 Summer Olympics, every international event demanded that procured food should be sustainable and the only standard for seafood at the time was the MSC certification. At first, I wanted to find out more about the world-class standard and participated in the Tokyo Sustainable Seafood Symposium in November 2015 titled “Japan’s Challenge from the Perspective of Seafood”. It was the perfect title — From the PERSPECTIVE OF SEAFOOD. And it’s JAPAN challenging the world.

At that symposium, one of the speakers named Mr. Shunji Murakami (current CEO & President of UMITO Partners, who was working with Ocean Outcomes at the time) kept on talking about “FIP” in a passionate tone. “FIP” refers to the “Fishery Improvement Project” that helps fisheries—that have the ambition to acquire MSC certification but are not quite there in terms of sustainability—to improve their fisheries.

I figured what he was preaching might be the perfect thing for me at the time and asked him about it on a later date. When he told me that there were no FIPs in Japan yet at the time and that “you would be the first FIP in Japan if you do it now,” it got me excited and all fired up to do it. I just love being the first to do something.

—While Mr. Ohno is well-known as a pioneer in this industry, as shown in the branding of “Shun-jime Sea Perch”, how did your peers respond to the “First FIP in Japan” that you embarked on?

They went “He’s doing something weird again” or “Do whatever you want”, but there was no opposition. As it was an obstacle that I had to overcome to supply our fish to the Tokyo 2020 Games, I was ready to spend some capital on it.

The MSC standards clearly state everything a fishery is required to do to protect the marine ecosystem and avoid stock depletion, such as managing catch volumes. It wouldn’t be sustainable otherwise. As I was already concerned that I would not be able to pass down a thriving sea to my children and grandchildren, it resonated with me. I realized that I could not change anything by myself and decided to make a genuine effort to get fellow fisheries involved.

So, I started sharing information to fellow fisheries on social media and gave speeches at symposia. That was when I discovered that many people running fisheries around Japan felt the same way, which was encouraging. Knowing that I was not alone. And that I was not wrong. Convinced that I was right, nothing could stop me at that point.

—You established the “Securing Tokyo Bay’s Fishery Resources for the Future” study group for the members of the Funabashi Fishery Cooperative Association as a part of the FIP, right? How did you manage to involve the other fishermen in your locale?

Traditionally, as long as you follow the rules established among the fishermen, you can catch as much fish as you can regardless of the price and market demand. Managing that meant asking them to lower their income. Obviously, nobody would agree to that.

So, I wanted to establish a study group that showed them the advantages that made up for it. For example, sharing information on cheaper and more sustainable engine oils for fuel savings. Other than that, we also invited a professor on stock management to present actual numbers showing how we may not be able to make a living as fisheries in the future if we continued doing what we did.

Mr.Ohno giving a speech at the Tokyo Sustainable Seafood Symposium 2019

—In the “Sustainable Sourcing Code for Fishery Products” announced by the Tokyo Organizing Committee of the Olympic and Paralympic Games in 2017, the Marine Ecolabel Japan (MEL) certification was required instead of the MSC certification. How did that make you feel?

Honestly, I wasn’t surprised and deep inside my heart, I was actually expecting to see some kind of local sourcing standard since it was going to be held in Japan. If there wasn’t, most of the fish for the Edomae sushi served at the Tokyo Olympics would have to come from the West instead. Impressed with the enthusiasm of the officials who worked hard on it for all those years, I got the MEL certification in 2018.

While many people harshly criticized the MEL for not being in line with international standards, the MEL Fisheries Version 2 Scheme is impeccable. We will have to see within one or two years whether it will work in practice and whether the fisheries involved can abide by its rules. Nevertheless, I hope we can show the world that Japan’s certification scheme is as good as anything out there.

On top of that, when people ask “what about MSC?”, I want to be able to say “I have that too.” That’s purely due to my sense of pride (laugh) but I don’t want to leave this halfway done now that I have come this far. When I get the MSC certification, I will promote it all over Japan. This has turned into something bigger than supplying seafood to the Tokyo 2020 Games.

The Shunjime- Sea Perch Pie was sold at a crowd funding platform Makuake until March 2022. The recipe was created by aMichelin Star French chef.